Review: The Sisterhood of the Traveling Pants series 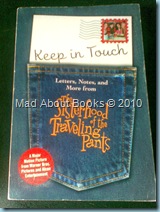 The Sisterhood of the Traveling Pants is one of my favorite book series. The first book, especially, was captivating because of the close-knit group that was portrayed by the four friends, Libby, Carmen, Bridgette, and Nena.

The story starts with the group finding a simple pair of pants in a store, which, surprisingly fit them all, despite their physical differences. It just didn't fit their size, it fit them perfectly. They took it as a significant sign that they should buy the jeans and that they can pass it around. However, the pants was more than just an extra piece of jeans for them; it became a symbol of their friendship and something they took support from when they were down in the dumps since high school up to their early college years.

What I liked about the series was that the problems were realistic and they did not concentrate on aspect of a girl's life. The series revolved around the ups and downs in the relationship between the four girls, while at the same time, their growth as a person, their relations with friends outside the group, their relationship with their family, as well as their individual growth. It's important to note that the girls were able to develop friends outside their clique, unlike other movies that depicts friends as being limited to only their group.

The series also showed that as they grew older, their friends still stuck around. However, the physical distance between them, due to their different schools, seemed to build a rift between them and they started to use the pants as an excuse to not see each other anymore.

The writing style of Ann Brashares remained the same throughout the series -- logical, steady, and not too dramatic even in the dreary parts. The story plot per book, including the setting of each girl's story was excellent and in keeping with their character throughout the whole series.

In the end...well, the book series is too interesting to divulge more twists and reveal the ending and I highly encourage you to read it. :)

Email ThisBlogThis!Share to TwitterShare to Facebook
By Goldie at 9:56 AM