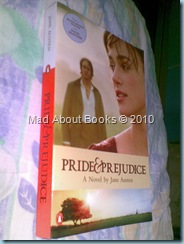 Jane Austen is one of my all-time favorite authors and Pride and Prejudice has been included in my list of favorite books since I first read it in high school. While other people may find it boring to read a simple book about the life of sisters and getting married in the England lifestyle of old, I find it utterly fascinating to get a glimpse of what life was like before. The words are, of course, hard to understand because they're usually written with old words but it challenges me to learn new things instead. :)

Pride and Prejudice, like most of Austen's works, revolve around relationships and the seemingly-lone purpose of daughters in the old days -- that of getting married and securing a handsome (meaning rich) husband. I was actually surprised that in the old days, the money of the woman was an issue and is part of one's dowry because in our culture, it is usually the man who has to give such an offering when asking one man's daughter to be his wife.

The portrayal of Jane Austen was rich enough to distinguish the personalities of each character and yet not too detailed to make the story boring. Furthermore, the climax of the story was so dramatic without being melodramatic that it just sends the right kind of shiver up and down your spine, makes you clutch your heart and say, "Oh I want my own Mr. Darcy!" The conflict was not too much, overdrawn, or even exaggerated but a simple misconception between two people who could not have been more right for each other. :) This book has all the elements of a great book to read while lounging under the tree on a lazy afternoon. I would recommend this book for all those looking for a good love story without the usual drama that is written in books these days. :)

Email ThisBlogThis!Share to TwitterShare to Facebook
By Goldie at 10:48 AM