Review: The Girl with the Dragon Tattoo 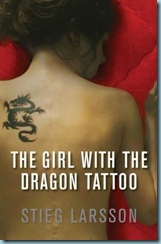 I’ve been seeing this book as one of the top books for 2010.  I managed to get my hands on the first two books (with the third coming soon!) when our good friends, the Dagdag family, lent them to us and subsequently gave them.

The Girl with the Dragon Tattoo is the first book in the Millenium Trilogy by Stieg Larsson.  A bit of trivia about the series, it’s the only series that Larsson wrote because he died just before the series were published.  Sadly, he never got to see the success of his novels but I thank my lucky stars he managed to get these jewels out to the appreciative public (like me).

The book one sets the ground for the characters and builds enough intrigue to make you want more of the character as soon as you hit the roughly 600 pages of pure intrigue and goodness.  The plot revolves around two main characters, Lisbeth Salander and Mikael Blomkvist who teamed up together to search for the missing niece, Harriet Vanger, who was suspected to have been murdered.  Mikael is a journalist with strong principles and enough just indignation, speaking the truth even when he is sorely ridiculed by his peers.  Lisbeth Salander has been declared incompetent by the Swedish state because of some manipulations…which will be discussed in the next book.  However, as the story unfolds, Lisbeth Salander proves to be anything but incompetent.  The story is more complicated than what it seems and people prove to be more than what they seem to be.

I give it five stars because of the great plot, complexity and growth of the characters, and a fluid writing style.  The 600 pages leaves you feeling satisfied at the end…and yet hoping for more information on how Lisbeth Salander turns out.  Will they get together?  What happened to her past?  What will happen to her in the future?  Admittedly, I’m easily spooked but this book actually got me too paranoid and I slept with the lights on!  But, it was a satisfying, good read.

This book contains adult content and violence so it’s not for the light-hearted and definitely not recommended for kids but for adults, go ahead, buy it, and lose yourself in this thrilling story.

Email ThisBlogThis!Share to TwitterShare to Facebook
By Goldie at 1:35 PM