Review: She Went All the Way 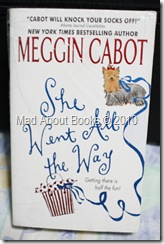 I'm the kind of reader who, when I like a book by a particular author, I tend to acquire most of his/her other works under the assumption that the other books by the said author are equally thrilling. In this regard, I consider Meg Cabot as one of the few authors who caught my eye because of her flair for writing about the same topic (love) with ordinary plots (boy-girl relationships) but the story still comes out as fresh.

I first started reading Cabot's Princess diaries when I was younger but I did not continue with the series. It was only a few years later did I pick up another one of her works, particularly the Boy series. I was impressed by her with those three books which led me to read more of her works and I came across this particular book.

Basically, the plot revolves around a writer who fell in love with an actor she particularly disdained but eventually fell in love with when circumstances put them alone together for some time as someone kept trying to kill the actor. What I love with this story is that the plot is simple and it's an ordinary theme but I found myself continuing with the story anyway. The frequent word-sparring of the two characters kept me wanting more and kept me hooked on the book til the end. It's definitely a romance story with all the right thrills at the right moments.

Although I finished the story with a satisfied sigh, I felt like there were times when I thought the story could have finished already but there was more. The continuing story lines were okay but I felt like it was simply being dragged out. Furthermore, it did not make me feel like I wanted a sequel or that I wished it was longer. But still, I would recommend the book for anyone looking for simple chick lit to read while lounging around or chilling before bed. :)
Email ThisBlogThis!Share to TwitterShare to Facebook
By Goldie at 11:23 AM