Review: The Girl who Played with Fire 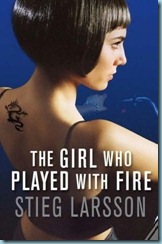 The Girl who Played with Fire is the sequel to Stieg Larsson’s The Girl with the Dragon Tattoo and I’m telling you, this one does not disappoint.  In here, we learn more about Lisbeth Salander’s background and how she came to be that way.  There is an explanation for all her kookiness, for her stand-offish behavior to others, and for her great distrust in others.

We see more of her morality, her sense of injustice – especially against violence to women. The second book made me realize why I’m drawn to the series so much and it’s precisely because of the strong theme of anti-violence and maltreatment towards women.  And the book, instead of exploiting the sexual imagery into raunchy scenes, manages to raise one’s hackles and feel a certain animosity to these crimes against women.

In the sequel, a series of murders is set-off by a book that was about to be published and an article in Mikael’s magazine, the Millenium.  Lisbeth Salander is implicated as the killer.  Everything was made worse because of her supposed violent streak and incompetency and the media goes into a feeding frenzy of condemning her before she is even caught and tried.  The story manages to combine Lisbeth’s background and the real murderers but it puts her life in very grave danger.

I bet you cannot read the book without sympathizing with Lisbeth in the end and marvel at her brilliance and strong character.

Another trivia, which I read from Wikipedia (I know it’s not very reliable but as far as gossip goes…) is that Larsson apparently witnessed a gangrape of a girl named Lisbeth when he was 15 but he was not able to do anything about it.  For the rest of his life, he felt guilty for not helping her and it helped influenced the theme of the Millenium Trilogy.

This book is not for the squeamish, not for the faint-hearted, and definitely not for kids.  But it’s definitely worth every penny.  Be forewarned though, you’ll find yourself wanting to grab the third book as soon as you finish with this one. Yes, it’s that intriguing.

Email ThisBlogThis!Share to TwitterShare to Facebook
By Goldie at 9:24 PM