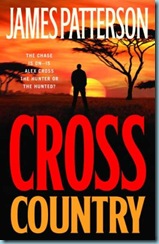 Just finished Cross Country by James Patterson and although I’m not exactly raving about it, I think it still deserves 4stars.  I’m satisfied with the plot, the style of writing, and loose ends were all tied up quite nicely.  Moreover, although I was not exactly kept on my toes the way I was with Cradle and All, I still enjoyed the book.  It was very informative and it’s quite different from the previous Cross novels because, as the title suggests, Cross went to other countries.

Alex Cross was once again involved in a seemingly-senseless murder mystery.  But this time, the murder affected him personally because the mother of the family who died was his ex-girlfriend way back in college and things were pretty serious between them before.  Furthermore, he was pretty sensitive to the killings of kids.  Aside from that family, more and more people were dying and it all points to one killer –> the Tiger.  However, he’s from Africa and the only way to catch him is to go there.

And so Alex Cross goes to Africa, blindly, I might add.  From there, the persona of Alex seems to be different as he was almost always the underdog.  He was always beaten up and always kidnapped.  I think he’s getting old.  Anyway, once there, James Patterson doesn’t mince words with the situation there.  I actually kind of like the plot because it touches on the political issue on the intervention of America in Darfur, or the lack thereof, and the truly horrible situation back there.  I found myself saying “crap” a couple of times due to the frank dialogue about the treatment of women in Africa.


“When I was young…I was raped…they used the handle of a shovel.”

What?  I don’t even want to imagine how that happened but that’s just one example of how life is in other parts of the world.

As to writing style, I  think he’s better off writing alone because his signature style is largely affected by having a co-author.  In this book, he actually explains whodunit and the reason, as opposed to his previous Cross novels, where he doesn’t really tell you and you’ll just end up frustrated.  The story was smoothly written, fast-paced, with enough thrill to make you continue reading but not as much excitement and does not inspire the same level of curiosity as his other books did.

However, the book has an exciting finish that actually makes me want to buy the next book just to find out what happens next!  Don’t worry, the plot in this book is finished by the 400+ pages (in hardbound) but there’s just something in the ending, which I won’t reveal, that might make you go “Aw shucks, gotta get the next one!”

Do I recommend the book? Hmmm it’s a good enough book to add to your collection and some might enjoy it more than I did.  It’s worth the money, actually although it’s just not very exciting! I think the bar was raised higher than ever after reaching Cradle and All.  But go ahead and get your copy for leisure reading this holiday season :)

Email ThisBlogThis!Share to TwitterShare to Facebook
By Goldie at 10:48 PM