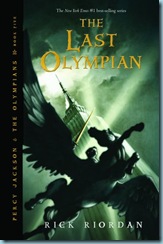 This was the second time I read the series since I read it last year, way before it became popular or became a movie.  I read it as an ebook but after reading the whole series, I still spent mega bucks to purchase the whole set :)  It’s not that the writing was as superb as J.K Rowling’s.  I simply loved the whole plot because it came at a time when the literary world was inundated with too many stories on vampires and werewolves.  Honestly, vampires are so passe.  Hello, Buffy?  And so far, nothing beats the love story, complexity, and magical elements in Buffy.

Anyway, it was about the supernatural as well but it involved Greek mythology - not your usual supernatural plot.  I give this book a 4 1/2 stars because of the refreshing plot but it contained elements found in other books.  I found similarities between Harry Potter and Percy Jackson and needless to say, Percy Jackson lost.  Seer?  Self-sacrifice?  One guy hero?  A girl bestfriend?  One Great Prophecy (I mean, really?)?  But anyway, I still enjoyed it despite the similarities in the two books.

Anyway, Percy Jackson and the Last Olympian is the last book in the series (total of five books in all if you didn’t know it already) and finally, after four books of hinting about the prophecy, you finally get to find out what it means.  And the prophecy says…*tooooooot* you should read the book.  Hint: Someone will die.  In fact, many someones will die.

The book is titled “…the Last Olympian” because it basically points out that everything starts with home, with your family.  I was actually surprised when I read that the Last Olympian was an unmentioned god in the previous four books and actually not thought of very much.  Good point, though, when she (yes, the Last Olympian is a female god) explains that home is important and that even when everyone else leaves, she stays.

For the positive side of the book, it’s quite entertaining and kudos to the humor portrayed in each book.  Plus points for the updated pop culture references.  However, the story was just not complex enough for it to earn the title of “one of my favorites.”  Granted, it’s a good book, a great plot, and fun to read but certainly not at par with Harry Potter.  Then again, no book has earned yet the honor of being comparable to the Harry Potter series.

Do I recommend you to go and read it and pay all your hard-earned cash (or at least your parents’ hard-earned cash) on these books?  Yes, very much so.  Or you can put it in your Christmas wish list (since it’s Christmas after all!).  It’s great for light-reading, a book good enough to read repeatedly, and reading it in e-book format does not really have the same impact as an actual book does.

Email ThisBlogThis!Share to TwitterShare to Facebook
By Goldie at 11:30 AM