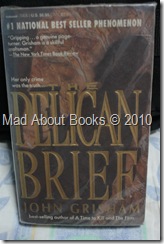 I consider John Grisham's The Pelican Brief to be one of his best works. The plot basically revolves around a smart college student who wrote a brief about the recent murders of court judges. When the brief was leaked, she became the target of numerous assassination attempts and several other people were killed, leading her to conclude that her brief hit the spot.

What I liked about this story was that it had a different plot. Other stories about college students usually revolved around ditzy college students, blonde girls, or students getting themselves into innumerable, crazy scrapes. But this one took on the more serious part of the students and I liked that. Furthermore, as with other Grisham books, the suspense of whether or not she will be caught kept my heart pounding.

I also liked the ending because Grisham did not push the love story angle too far in hopes of attracting romance readers and it gave us room for imagination as to what could possibly transpire between the student and the news writer.
Email ThisBlogThis!Share to TwitterShare to Facebook
By Goldie at 11:57 AM