Review: Memoirs of a Geisha 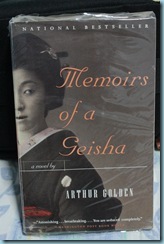 Enter the world of Japan's famous geishas with Arthur Golden's exemplary work, Memoirs of a Geisha. This book was adapted into a movie starring Zhang Ziyi (Crouching Tiger, Hidden Dragon) and Ken Watanabe (The Last Samurai).

The book, as seen by the title, portrays the life of the geisha in the old times. Although the book cited actual places in Japan that geishas and their patrons went to, the book is still a work of fiction. The geisha that the book is based sued the author for revealing her name and the false stories that the book portrayed.

The plot basically told the life of Chiyo Sakamoto from when she was still a child and her rise to being one of Japan's top geishas. The story also had a romantic angle with a certain Chairman and a long-time quarrel with a previously top-rated geisha.

Despite the somewhat skewed information in the book, the world that was introduced to us is interesting. There is something fascinating about the exact practices of the geishas in preparing for their coming-out or to be chosen by the winning bidder. Furthermore, the ideas revealed like how women were trained on how to attract men, serve him, or pleasure him were interesting. On the other hand, the women were also hardened in such a way that they did not go into the industry with the expectation that they will find love. They are also hardened such that they know that they must find a way to set themselves up indepdently for the future, when their sponsor leaves them.

I give this 4.5 stars because of the refreshing story line, interesting twists, and fascinating environment that the author described, sparking our imagination. However, there were some instances when the story felt dragging or boring but was still relevant to the story.

Admittedly, I initially believed that everything in this fictional work was true but apparently, it isn't. Still, the fascinating world created by the author is an environment one will surely enjoy immersing in for an afternoon or before sleeping. :)
Email ThisBlogThis!Share to TwitterShare to Facebook
By Goldie at 12:29 PM