Sometimes, it's just fun to participate in surveys to look back on our reading/blogging year. Thanks to Jamie @ Perpetual Page Turner for this! :)

Short story -- Young and Scambitious by Mina V. Esguerra.
Filipino novel -- Bata, Bata, Pa'no Ka Ginawa? by Lualhati Bautista.
Foreign novel -- A tie between Discount Armageddon by Seanan McGuire and I'd Tell You I Love You but Then I'd Have to Kill You by Ally Carter.

2. Book You Were Excited About & Thought You Were Going To Love More But Didn’t?
Hmmm, Twilight with an Infamous Earl by Alexandra Hawkins. It had quickly become one of my favorite series but the last book, and the most anticipated one of all, just wasn't as exciting as I thought it would be.

3. Most surprising (in a good way!) book of 2013?
The Wicked Wallflower by Maya Rodale. After reading so many books from the genre, I wasn't sure I'll find another five-star book. But I did! I can't wait for the rest of the books in the series.

4. Book you read in 2013 that you recommended to people most in 2013?
Trese: Stories from the Diabolical, Vol 1 by Budjette Tan and Kajo Baldisimo for graphic novel, and for a novel, it would be Confessions 02: Private School Murders by James Patterson and Maxine Prieto. :)

5. Best series you discovered in 2013?
Gallagher Girls series by Ally Carter. I read all five books in the span of three days, then I waited a little more for the last book. Best. Series. Read. in 2013.

6. Favorite new author you discovered in 2013?
Carlo Vergara for the Zsa Zsa Zaturnnah graphic novels. Funny but definitely for mature readers only. After reading the first book, I immediately had to have the second one. Also, Trenton Lee Steweart for the Mysterious Benedict Society series. Three chapters, and I wanted the whole set!


7. Best book that was out of your comfort zone or was a new genre for you?
Curtsies and Conspiracies by Gail Carriger. I only discovered steampunk lately and have read less than ten books from the genre, so I'm still feeling my way around it. So far, I like it!

9. Book You Read In 2013 That You Are Most Likely To Re-Read Next Year?
I don't like to re-read anymore because I have so many other books I want to read and so little time. But I wish I'd have the time to reread Pride and Prejudice again. Before I became serious with blogging, I read it every year. I've read it for about six times now. 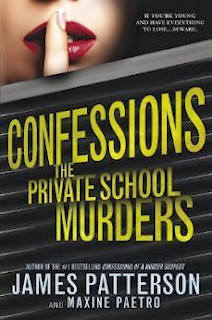 Confessions 02: The Private School Murders. It's apt for the whole story. It's intriguing. It's attention-grabbing.

11. Most memorable character in 2013?
Ada from Zsa Zsa Zaturnnah. It was my first time to read about a gay protagonist, and I found myself sympathizing with the character, and how Carlo Vergara portrayed -- combining gay stereotypes and jokes while showing depths of emotion and otherworldly powers.

12. Most beautifully written book read in 2013?
Executive Actions by Gary Grossman. The plot was complex, there were a lot of characters and sub-plots, but the ending made it all come together. Gary's writing was superb!

13. Book that had the greatest impact on you in 2013?
How curious. None that I can think of. I try to stay away from books that will just stress me out after reading because I read to relax :)

14. Book you can’t believe you waited UNTIL 2013 to finally read?
Easy. The Mysterious Benedict Society by Trenton Lee Stewart! It's been recommended to me by my sister for months but I never got around to reading it until this month.

“Oh my God,” she whispered. She did not think she’d ever said those words so many times as she had in the last few minutes, but if there had ever been a time to praise the Lord’s creation, this had to be it.”

This was from A Night Like This by Julia Quinn. It's not going down in literary history, but it's memorable for me because I remember laughing. Guess, of course, the scene where this line applies :))
16. Shortest & Longest Book You Read In 2013?
Shortest: The Son of Sobek by Rick Riordan, at 40 pages.
Longest: War and Peace by Leo Tolstoy at 1,315 pages.

17. Book That Had A Scene In It That Had You Reeling And Dying To Talk To Somebody About It? (a WTF moment, an epic revelation, a steamy kiss, etc. etc.) Be careful of spoilers!
Third Lie's the Charm by Lisa and Laura Roecker. I couldn't believe how the book/series ended, and I was truly disappointed.

18. Favorite Relationship From A Book You Read In 2013 (be it romantic, friendship, etc).
Hazel and Frank from The House of Hades by Rick Riordan. I like that they are blossoming. Also, Nico. Hehehe. If you've read the series, you know what I mean.

19. Favorite Book You Read in 2013 From An Author You’ve Read Previously
I don't want to be repetitive, so I'm going with Lost in Babylon, the second book in the Seven Wonders series by Peter Lerangis. I was lukewarm about the series after the first book, but with the second book, I now want to read the whole series!

20. Best Book You Read In 2013 That You Read Based SOLELY On A Recommendation From Somebody Else:
The Mysterious Benedict Society. Hands down. I usually don't read a book based on recommendations, but I do check out the books. It just takes me quite a while to read them :D

21. Genre You Read The Most From in 2013?
Tie between Young Adult and Romance.

22. Newest fictional crush from a book you read in 2013?
Hugh Prentice from The Sum of All Kisses by Julia Quinn. He's smart and witty, and I'm a sucker for men with brains and manners.

24. Most vivid world/imagery in a book you read in 2013?
The House of Hades, hands down. I felt like I was walking along with Annabeth and Percy!

25. Book That Was The Most Fun To Read in 2013?
Angus, Thongs and Full-Frontal Snogging by Louise Rennison. Oh my gosh, that book took me back to a decade's worth of youthful memories! :))

27. Book You Read in 2013 That You Think Got Overlooked This Year Or When It Came Out?
Consent to Kill by Mitch Flynn. I think his Mitch Rapp series is amazing.

1. New favorite book blog you discovered in 2013?
All the book blogs I've discovered this year are fantastic and contribute to my blogging life in little ways. :)

2. Favorite review that you wrote in 2013?
Oh my gosh, I'm not sure. Maybe...Just Like Heaven by Julia Quinn. I was just raving to write about it!

3. Best discussion you had on your blog?
For me, it's Maximizing Your Twitter Account. I had some very nice feedback and quite a lot of pageviews.

4. Most thought-provoking review or discussion you read on somebody else’s blog?
From Parajunkee's blog, Hot on Page, Felony IRL. Very nice!

5. Best event that you participated in (author signings, festivals, virtual events, memes, etc.)?
Graphic novel launch of Anak Bathala: Kalem. It was my first time to be invited to a launch as a blogger. It was great!

6. Best moment of book blogging/your book life in 2013?
When I finished reading War and Peace. Seriously. I've been trying to finish it for years. I only read less than a hundred pages over two years. Then in two weeks last May, I finished the whole book. I felt so proud of myself :))

7. Most Popular Post This Year On Your Blog (whether it be by comments or views)?
For some reason, it's my review of The Fall of Five by Pittacus Lore.

8. Post You Wished Got A Little More Love?
All my reviews - especially the ones that aren't YA or currently the trend. I think there are a lot of wonderful books outside YA.

10. Did you complete any reading challenges or goals that you had set for yourself at the beginning of this year?
My Goodreads Challenge is almost done (just two more books and I reach 200!) and I reached my targeted Mother status at the 2013 Witches & Witchcraft Challenge by Melissa's Eclectic Bookshelf. :)

1. One Book You Didn’t Get To In 2013 But Will Be Your Number 1 Priority in 2014?
The rest of the books in the Mysterious Benedict Society series because the whole set costs around P3000+. I'm just waiting in case anyone gives me gift checks to our local bookstores :D

2. Book You Are Most Anticipating For 2014 (non-debut)?
Definitely the fifth book in the Heroes of Olympus series.

4. Series Ending You Are Most Anticipating in 2014?
I'm not anticipating the end of any books because I wish they wouldn't end! But in terms of a series finishing next year, that would be the Heroes of Olympus series.

5. One Thing You Hope To Accomplish Or Do In Your Reading/Blogging In 2014?
I hope to be able to relax. I don't want to do the Goodreads Reading Challenge again next year. I wanted to reread some of my books (i.e. Pride and Prejudice!), but I felt like I had to keep my numbers up. I started blogging to talk about the books I love, and I want to go back to that and not be pressured by having a lot of followers to gain ARCs.

Also, I hope to read more books by Filipino authors and blog about it more often. And gain new readers who are into the same books as I am, and discover bloggers with similar bookish interests! :)

How about you, how was your reading and blogging life for 2013?

Email ThisBlogThis!Share to TwitterShare to Facebook
By Goldie @ My Book Musings at 11:23 AM