If you're looking for that last minute gift to give to that friend who lives in other countries, why not send them a book? The Real Score is a delicious debut by Filipina author Kesh Tanglao.

Caitlin's friendship with Marcus, the de facto frontman of the world's biggest boy band Gezellig, has long been an object of scrutiny by almost everyone--their friends and families, the media, and his fans--ever since they "went public" a couple of years back. Who wouldn't be interested? She was a nobody, catapulted into the limelight of his fame when he struck an unusual friendship with her.

To both Caitlin and Marcus, what they have is a "perfect little thing." But then something comes along and threatens it.

In a no-holds-barred interview, will they finally be forced to settle the score?

“Is there any chance you’d want to stay?”

I gripped the handle of the door. “Stay?” I said softly without turning.

I heard some shuffling of footsteps and then I felt him standing behind me. He playfully poked me on the shoulder to face him, and I did, finally letting go of the handle.

“You have a show later, Marcus. Shouldn’t you be sleeping by now?”

Marcus shrugged. “I couldn’t even if I tried. I’m too…wired.”

I smirked. “Tea is supposed to relax you, not make you jumpy,” I commented, and he wrinkled his nose. “I don’t think it’s the tea.”

“Ha,” I said, shaking my head, struggling to hide my smile.

“I’ll get us room service.”

“You’re bribing me with food. After I had a buffet. Are you kidding me?”

He opened his hands in front of him. “I was hoping the company was enough.”

A tiny, very unsure voice in my head said: Be spontaneous?

And despite the louder voice screaming “no,” I relented, sighing and flopping back down on the couch. 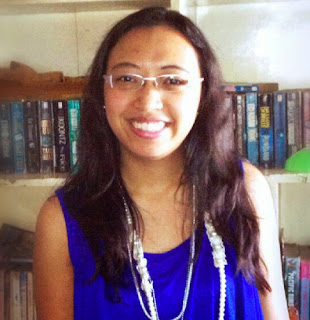 Kesh Tanglao is a full-time market researcher. When she’s not crunching numbers, she spends most of her free time watching TV shows, listening to music, and reading. Also a self-proclaimed fangirl, she likes cheering for her favorite sports teams and supporting her favorite artists. The Real Score is her first published novella.

Enter the giveaway!
Philippines only
Two winners will be chosen (one for The Real Score, one for In Over Her Head).
a Rafflecopter giveaway