Excerpt Reveal + Giveaway: In Over Her Head

In Over Her Head
Amazon | Smashwords | Goodreads | Paperback

Welcome to my stop for Anne Plaza's In Over Her Head blog tour! I'm really excited to share this excerpt teaser reveal. Also, there's a Philippines-only giveaway not just for In Over Her Head but also for Kesh Tanglao's The Real Score. And they have some real sweet goodies in store for the lucky winner. How I wish it could be me! Lol.

Christmas is coming soon! Have you got a gift yet? Why not Anne Plaza's realistic take on love and second chances in In Over Her Head? :)

All she wants is to get even...


Erika Apostol's quiet and unassuming life gets disrupted when she learns that Richard Javier, the very same person who broke her heart many years ago, is now back in the country. Her world is turned upside down as old feelings she thought were buried resurface to haunt her once more.

Determined to give Richard a dose of his own medicine, Erika finds herself involved in an outrageous plan devised by her friends. They enlist the help of Jerome Gonzales, an attractive and charismatic DJ (with a playboy reputation), to pose as her significant other.

As the plan goes in full swing, Erika discovers Richard's jealous side, and that there's something more to Jerome than meets the eye. Will this grand charade work out the way it should, or will she be left with nothing in the end?

I shrug, not trusting myself to speak. Suddenly the entire scenario feels like something out of a cheesy movie: tiny, blinking lights peppering the ink-black sky, the night breeze sending a fresh wave of goose bumps on my skin, and Jerome’s presence making my senses go haywire.

“Sorry, I don’t have a jacket with me, so I hope this would do.”

I don’t realize I’ve been rubbing my arms and Jerome must have taken that to mean that I’m getting cold. He pulls me close to his side and I can feel the warmth emanating from his solid body.

What the hell is happening?

I can barely move a muscle, much less breathe, at the closeness we’re sharing. I know we’ve done this several times before, but they were all for show when Richard’s around to mess with. But this time, there’s no Richard, no acting, no nothing. Just me and him, inhaling cigarette smoke while killing time.

I struggle to get some small talk going, but I find myself at a total loss for words. Jerome doesn’t seem to mind the lack of conversation and is just content with us burning our lungs away and…cuddling.

I try to shift my weight to my other side, but he pulls me a bit closer. “We don’t really need to do this. No one’s watching.” I don’t realize I say those words until they’re out of my mouth. I look furtively at Jerome’s expression.

“So you’ll know that I’m not doing this for show either.”

I frown slightly. “Do what?”

And the next thing I know, he’s kissing me. But that’s not what’s shocking at all.

It’s that I kiss him back. 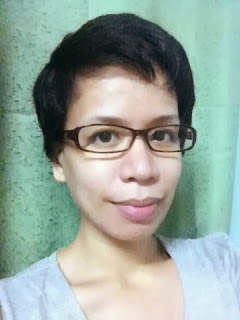 Anne Plaza has a degree in Psychology, but has actively pursued a career in writing in her previous work as a reporter and online editor. She currently works in the field of marketing communications and spends most of her time writing fiction (while not on the lookout for the nearest cupcake and cronut store).  Aside from writing, she loves to read contemporary romance, young adult, fantasy, and historical fiction. She also collects stamps and postcards, and loves everything about cats. Anne is based in Quezon City, Philippines. In Over Her Head is her first published work in English.


Enter the giveaway!
Philippines only
Two winners will be chosen (one for The Real Score, one for In Over Her Head).
a Rafflecopter giveaway