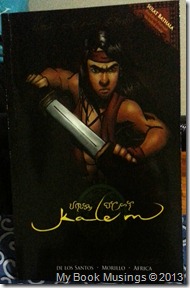 I was invited to attend the relaunch of the book one of the five-book series Filipino graphic novel Anak Bathala: Kalem, held last Friday, January 18, 2013, at Fully Booked, Bonifacio Global City.The creators are Norman de los Santos, Bernard H. Morillo, and Edsel L. Africa, and they have been friends since high school. As Edsel mentioned to yours truly during the book launch, this was already an idea that they had in high school, that Norman mentioned again when they grew up. It was just an idea that they tossed around in their youth that they have worked hard to realize.

As the title suggests, Anak Bathala: Kalem revolves around the self-discovery of Kalem and why he is called “Anak Bathala”. Norman is quick to point out during the forum that it is different from “Anak ng Bathala”, as “Anak Bathala” pertains to demi-gods, while “Anak ng Bathala” refers to pure gods. He also states that he coined the term “Anak Bathala”.
I know working with others can be quite hard, so I asked them how they were able to meld their different views or ideas into one product. They said that since they have been friends since practically for most of their lives, they already know how to work with each other, how to tweak each other’s ideas.I have not read the graphic novel yet (they gave me a complimentary copy as a blogger), but seeing the rapport between the trio, I am eager to see how this is translated into the comic book. While Anak Bathala: Kalem is the brainchild of the three men, Norman also acts as the design director, giving the guidelines to the illustrators on how they want the novel to be done.

The program started with an invocation and some brief personal information about the authors. Afterwards, the floor was open to the guests for questions. We sure were burning up with several interesting questions! 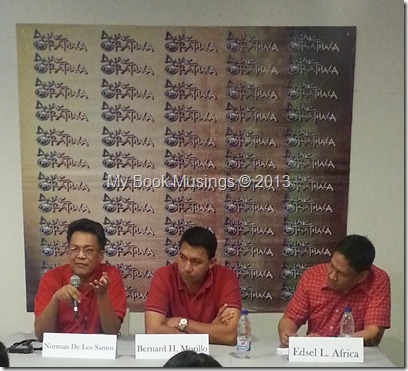 The creators of Anak Bathala: Kalem, from left to right:
Norman De Los Santos, Bernard H. Morillo, and Edsel L. Africa.
As previously mentioned, this is already a relaunch. They stated that they felt the previous release lacked details, and they were able to develop Kalem’s character more. The book is also their reinvention of different mythologies. The novel also has different shades, ranging from light to dark, because they want to show when it is day (light), afternoon (a bit dark), and night (dark!). It is written in English, mostly because Norman speaks English better, but having it in complete Filipino is an avenue that they do want to explore. They are also entertaining the idea of incorporating Filipino martial arts into their future books, but they want to make sure that the graphical representations right.

Some more photos during the event… 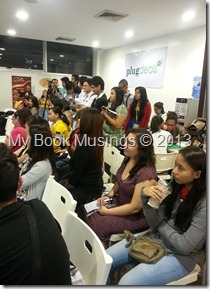 I’m somewhere in the photo with the other book bloggers and guests. 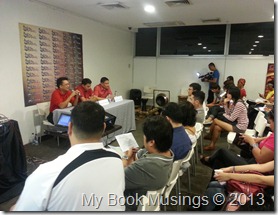 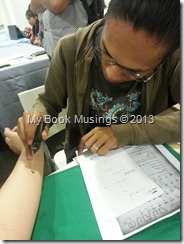 Getting my free henna tat done by Hero, who has been doing this for five years!

My finished tat. This is written in Baybayin, and spells “Di-Yo-Sa (Diyosa)” which means goddess in English. 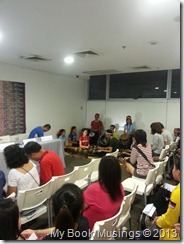 UP group Kontra Gapi also performed beautiful music for the guests prior to the event and after the forum. 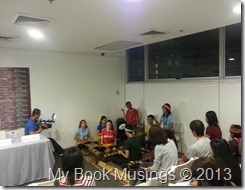 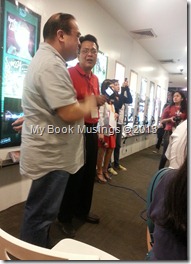 Budgette Tan, of Trese graphic novels fame, passed by the event. The boyfriend was so thrilled to see Budgette again. 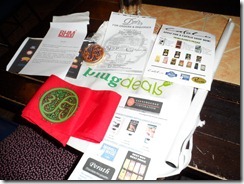 Some of the freebies given by the sponsors. I forgot to take a photo of the food provided! But included here are some flyers for Dee’s gourmet popcorn, coffee from Haengboghan Corporation, BHM Publishing House’s snippet of information about Kalem, and a schedule program of the event. There is also a cookie with a Baybayin script by Felicity Home Kitchen, and a poster of Anak Bathala: Kalem. There was also a brief presentation by Cartwheel Foundation.

Goldie (yours truly) with the three creators, Norman De Los Santos, Bernard H. Morillo, Edsel L. Africa, and of course Anak Bathala: Kalem. Bernard gamely posed with me while waiting for Norman and Edsel to finish signing the copies of the other attendees. 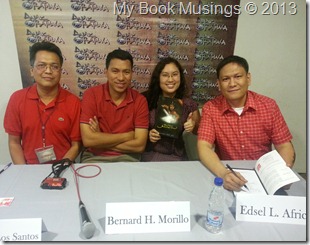 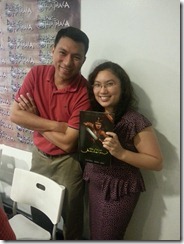 The event/graphic novel was relaunched by BHM Publishing, in partnership with 2P’s in a Pod. It was fairly organized, and the contact persons were friendly and accommodating. However, my real name and nickname were both called, with my first name mispronounced. I know it’s not a common name, but others usually verify with me the correct way to pronounce it before saying it aloud. Plus points to them for actually starting on time! I have not yet read Anak Bathala: Kalem yet because of familial duties this weekend, but I am already mentally rearranging my schedule this week to make time for it. Have a good week ahead everyone.

Email ThisBlogThis!Share to TwitterShare to Facebook
By Goldie @ My Book Musings at 12:08 AM