Review: When in Doubt, Add Butter

Cupcakes on the cover is almost a guarantee that I’ll be checking it out. I was actually checking out another book then I saw When in Doubt, Add Butter as one of the recommended books (and since it had a cupcake on it), I read the plot. Finally, I was able read the book, and I am so glad that I did! It’s another one of my new favorites and I am looking forward to reading Beth Harbison’s other works. 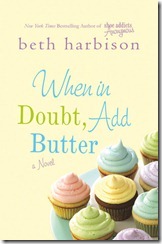 The plot from Goodreads is as follows:

As far as Gemma is concerned, her days of dating are over. In fact, it’s her job to cater other peoples’ dates, and that’s just fine by her. At thirty-seven, she has her own business, working as a private chef, and her life feels full and secure. She’s got six steady clients that keep her hands full.

There’s Lex, the fussy but fabulous department store owner who loves Oysters Rockefeller and 1950s comfort food; Willa, who needs to lose weight under doctor’s orders but still believes butter makes everything better; a colorful family who may or may not be part of the Russian mob; an überwealthy Georgetown family; the picture-perfect Van Houghtens, whose matriarch is “allergic to everything”; and finally, a man she calls “Mr. Tuesday,” whom she has never met but who she is strangely drawn to.

For Gemma, cooking is predictable. Recipes are certain. Use good ingredients, follow the directions, and you are assured success. Life, on the other hand, is full of variables. So when Gemma’s takes an unexpected turn on a road she always thought was straight and narrow, she must face her past and move on in ways she never would have imagined. Because sometimes in life, all you need is a little hope, a lot of courage, and---oh yes---butter.

I really liked a lot of the main characters in this novel. I liked Gemma and Mack, and even Gemma’s kooky clients such as Lex, Vlad, and Willa. This is such a feel-good book that reading it was so pleasant. I even ended the book with a smile on my face.

Gemma is one of those curvaceous (‘voluptuous’) women who used to be stick-thin but eventually had to let go and let herself have curves. I can so relate to that, except for the fact that I didn’t let myself have curves, hahaha. Anyway, she’s a great cook and is quite nice. She is also the type who works hard and tries to do her best. She’s so likeable!

‘Mack’ well…I figured out who he is early on into the game. And he seems to be nice. Plus, suddenly confronted with ‘that’ news, he handled it like a man. I have to give props for a man who proves himself as such. And I just love a man who knows how to take care of his woman and knows how to deal with kids! It’s really such an attractive trait.

Of all Gemma’s clients, I think Vlad is the most…surprising. He wasn’t who I initially thought him to be, but he was endearing nonetheless. Like a diamond in the rough, eh? Lex is also very likeable because, well, he’s nice to Gemma. His contentment with what he had in life was also different because I’m usually surrounded with people (including myself) who just wants more, more, more.

The plot was simple. Harbison did not try to do so much with her story. It was easy to read and the story flowed smoothly from one chapter to another. It was another one of those books I could just not put down easily. Another one that was different about this plot, by the way, is that she’s already almost 40 and single. Most chick lit I read are usually about 20+ years old or almost 30. This was somehow more adult but I was still able to relate to it (I’m 24).

If you’re looking for something different, something lighthearted, and something simple, I invite you to try this nice and pleasant story about a woman who had to confront her past and accept the future, ending up with a nice man along the way. I’m looking forward to reading her other books and I hope it does not disappoint.

Email ThisBlogThis!Share to TwitterShare to Facebook
By Goldie at 9:38 PM