Amanda’s Wedding took me by surprise. As I stated in my previous review of another work by Jenny Colgan (Meet Me at the Cupcake Café), I really enjoyed that book and looked forward to reading another one of her books. 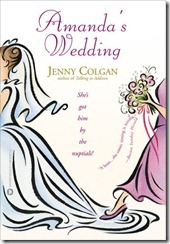 Mel and Fran can’t believe it when their old school friend Amanda, Satan’s very own PR girl, pulls off the ultimate publicity stunt in getting herself engaged to a Scottish laird. Who cares that Fraser McConnald has worn the same pair of Converse trainers for the last three years and that his castle is a pile of rubble with one Calor Gas heater – she’ll be titled!

Gentle, decent Fraser is clearly ignorant of Amanda’s wiles, so Mel and Fran, still smarting from the memory of all the mean things Amanda put them through in their days at Portmount Comprehensive, set out to sabotage this mismatch of the century.

Well, Amanda’s Wedding took me by surprise… and not in a good way. I was expecting the book to be funny as it is, after all, a book about friends trying to sabotage their ‘friend’s’ wedding. But it was just a whole mess that I was so bored reading it. If it wasn’t written by Jenny Colgan, I would not have finished it at all (and I was really bored).

So Mel is a copywriter and lives in a flat with a quiet woman named Linda. She gets piss drunk every so often and has been left by her old wannabe-musician boyfriend, Alex, who went gallivanting off to America. In the meantime, she gets drunk with her friend Fran, until she receives a message that 1) their bitchy friend is getting married to the man Mel really liked before and 2) her ex, Alex, is coming back to her.

Fran, on the other hand, is someone who has Mel’s best interests in mind and tries to keep her from making a ‘man mistake’ every time, but of course Mel doesn’t listen to her. She and Mel are best friends and she practically lives in Mel’s flat. She also seems to be over-sexed because, well, she has sex with almost every guy she comes across (with the exception of Fraser).

Amanda, who I cannot even call ‘poor’ despite the antics of the others against her, is a real piece of work @_@ She is condescending to Mel and Fran, she’s so bossy, she is disrespectful to the family of her fiancée, Fraser, and she is just so…fake. While I am not saying she deserved what she got, no one deserves to be leg-shackled to someone like that. And Fraser seems so nice…although I still wonder how they got engaged in the first place. Really.

I have to say that I was not able to relate to them. Mel has a good enough job that she blows off when she feels like it. She’s like a doormat for Alex, even waiting about nine hours at the airport for him. She rents a room with Linda, who actually owns the flat, but she doesn’t really do her share of house chores, she eats/drinks Linda’s stuff without permission, and she’s always noisy. And I don’t know why in the world she’s so gung-ho on Alex when he is a total loser? Seriously. He runs off to America and for 10 months you don’t hear from him. When he gets back, you’re there at the airport waiting for him? Talk about doormat.

I thought Fran was nicer but in the end, I was just surprised. I mean, you do not do that to your best friend and expect to be immediately forgiven. That was just undoing several years’ worth of friendship for a guy you didn’t even love.

The only characters that I actually liked was Fraser and his younger brother, Angus. They both seem to be nice and they actually look out for each other. I don’t know how they are looks-wise, although I’m not expecting Angus to be a looker since he wasn’t described as such.

Some people liked the book but I really did not. However, I am still going to read other books by Jenny Colgan in the hopes that her later works are better as this is actually her first work. Meet Me at the Cupcake Café was loads better so I’m hoping Rosie Hopkins’ Sweetshop of Dreams would have that Colgan magic I’d been expecting.

Email ThisBlogThis!Share to TwitterShare to Facebook
By Goldie at 9:37 AM