Review: All Afternoon with a Scandalous Marquess (Lords of Vice, book 5) 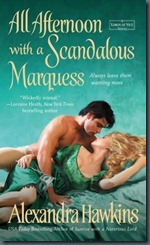 I was really looking forward to reading the next book in the Lords of Vice series by Alexandra Hawkins because I’ve become quite fascinated by how wicked and how in love they are with their wives but the fifth book, All Afternoon with a Scandalous Marquess, just wasn’t up to the same caliber as the first four books.

This book is about the story of the Marquess of Sainthill (‘Saint’), whom I’ve always thought was one of the nicest in the series, and the famous (or infamous) and mysterious Madam Venna, the always-half-masked owner of the brothel who frequently supplies women to the Lords of Vice’s club, Nox.

From the first moment Saint saw Madam Venna, he just wanted her. In these books, when they first say that a guy “wants” you, it simply means he wants to bed her. Of course, for these handsome and charming Lords of Vice, they usually get the woman. But Madam Venna always resisted Saint because she was already attracted to him and for her, the business must come first. She didn’t want to do anything to jeopardize her business that she worked so hard for. But after a year of flirting, they finally ended up in her bed…after which Madam Venna realized how emotionally dangerous it was to get involved with Saint and so she severed all sexual ties afterwards.

Apparently, she hides a secret that could ruin her and her business permanently, thus she is very careful to conceal her real identity and makes sure to separate her two lives – that of Madam Venna and who she is by day. However, certain characters in the story are aiming to ruin her and expose her. With her past, Madam Venna is wary of trusting anyone but most of all she’s wary of trusting Saint…with her heart.

I liked the story and I actually liked the twist in the story. Someone threatening to expose Madam Venna’s secret and ruin her business was a good plot. However, this line was not developed. A problem arises but it was not resolved even up to the end of the story. The book was long enough to have been able to provide some sort of resolution but you’ll finish the book wondering what happened. I mean, sure, the story between her and Saint was finalized but there were glaring loose ends that could have easily been resolved.

I’m hoping that the next book, Dusk with a Dangerous Duke, will bring back the spark and sizzle that the Lords of Vice books usually have. But most of all, I’m hoping that the last in the series, Twilight with a Forbidden Earl (as stated in the end of the book 5), which I’m guessing to be the story of Frost’s – ehem- downfall to love would be a perfect series ender.

However, despite my misgivings for how the story was finished (or unfinished, depending on how you look at it), the love story between Madam V and Saint is still good and you just can’t help but fall in love with Saint. So go ahead, pick up a cuppa and settle down with All Afternoon with a Scandalous Marquess.

Ciao!
Email ThisBlogThis!Share to TwitterShare to Facebook
By Goldie at 10:12 AM