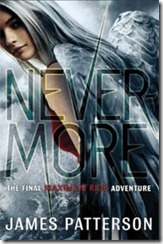 Just finished reading Nevermore, the eighth and last book in the Maximum Ride series by James Patterson. I don’t know whether to rejoice or to cry with its ending. Have you ever felt frustrated when an author makes you long for more by the end of the book? That is definitely what I’m feeling right now.

I think Nevermore is an apt title because it conveys that there are no more Maximum Ride books to come. However, it is confusing because I thought they were going to die! Or at least Max was. Still, I love the title and the cover art. It’s all very mysterious and attention-grabbing for a fan like me.

The plot takes a new twist in Nevermore as the flock, consisting of Max, Nudge, Gazzy, Iggy, and Dylan (with Total), try to live normal lives and go to a regular school. Life has been pretty much uneventful for them after Paris – when Angel died and Fang left, with Maya (or Max II) and started his own flock. However, as the story unfolds, we discover that Angel is actually alive but has been kept by scientists on their quest to ‘enhance’ or ‘study’ her more. Meanwhile, Fang gets betrayed by some members of his flock, ending with Maya dying. Back with Max, things are pretty good between them and Dylan, with Max seeming to start liking Dylan the way she liked Fang. However, with a new threat looming over the world, called and started by the ‘99 Percenters’, the Voice tells Fang to go back to Max and tells the rest of them to protect Max no matter what happens. Especially with the apocalypse seeming to arrive earlier than anyone ever expected.

I love the Maximum Ride series but I have mixed feelings about this one. The book was too fast-paced and too short to leave us readers satisfied. Plus, there have been some loose ends as to the characters, leaving us wondering what happened to them.

I love that Fang went back to Max. I mean, despite Dylan’s existence, they belong together. Dylan, after all, was just engineered to be with Max. But as we all know, you can’t tell your heart who to love. And no one certainly tells Max what to do or what to feel. Of course it’s a done deal that Fang should be with Max. But what about Dylan’s agonized existence – that of always wanting Max but never having her, unless Fang – impossibly – dies? I mean, that’s just sad, man. Of course I don’t want Fang to die but the book, sadly, does not give any resolution to Dylan’s existence, apart from the idea that in the end, Fang and Dylan just get to an easy camaraderie.

I also have mixed feelings about Angel. I mean, I’ve been vacillating between liking her and disliking her since the last few books but this one just left me speechless. In here, we discover that she has been manipulating them all. However, she does have good intentions, which is to ensure that they will survive and Max will be able to lead them all. She has been having visions of the end of the world and she acted as she saw fit. But I still don’t know if she’s really good or what. I pity her, though, because she’s just a kid but by the end of the book, she seems to have lived through a lot of things I cannot even contemplate.

In the book, Fang seems to have changed from Mr. Silent Waters Run Deep to Mr. Expressive. He just had a personality change by the end of the book, which seems to be a good thing anyway. However, his feelings for Max and Maya were not resolved, leaving me wondering if he ever loved Maya for her own self or simply because she was a shadow of Max. I’m guessing the latter but his words and actions sure are confusing! Then again, he was also confused.

Since Fang left the other members of his flock and there were no mentions of them in the end, I am left wondering what happened to them. Did they reach paradise as well? And in paradise, where did those mutants come from? How long have they been living there? Where they created after the flock, because the other experiments before them were killed, if you remember, for being imperfect.

At the end of the story, there was also no conclusion as to what happened to the ‘99 Percenters’ and how in the world did the other humans survive. If half of the world was submerged in water, then how did the computers survive? It’s really all so confusing. Gazzy and Iggy were also not mentioned in the last few chapters, leaving me to assume that they were in the caves when the ‘end of the world’ came.

Other things I like about the book is that in the end, they’re all still together. But there are quite a few holes that could have been easily answered or ended. The story is easy to read and funny, entertaining as usual but I don’t feel as satisfied as I expected to be. Still, I enjoyed the book and it’s a good way to resolve all those hate feelings over the separation of Max and Fang.

Email ThisBlogThis!Share to TwitterShare to Facebook
By Goldie at 2:11 PM