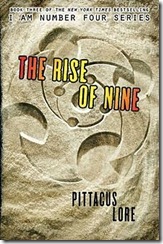 I have been waiting for The Rise of Nine for about eight months now, since I finished the second book The Power of Six.That book just made me anticipate the third book even more!

In The Rise of Nine, we finally see almost all the Garde coming together (except for Number Five, I don’t know why). By the end of the book, however, there were only eight of them together so maybe it should have been called The Rise of Eight? :p No, the story doesn’t revolve around Nine at all. But I digress.

In The Power of Six, Four and Six separated paths. Six went on her way to Spain where she suspected was another Garde and Four went with Sam to a nearby cave. Unfortunately, Sam was left behind in the cave but Four discovered Nine and they got out alive, albeit harmed. Meanwhile, Six met Seven and discovered that Ten really does exist, along with her still-living Cepan, Crayton. The Rise of Nine discusses the journey of Four, Six, Seven, Nine, and Ten although they were divided in two groups.

Four and Nine were still in America and Four wanted to go back to the cave to save Sam. However, Nine is adamant that they go meet up with Six and the rest of the Garde as was planned. But they keep getting attacked by government operatives…carrying Mogadorian weapons. Throughout the story, the duo keep getting attacked and eventually discovers that the United States government has made a pact with the Mogadorians, leaving them unsure of who they can rely on. As the story progresses, we learn more about Nine and how he grew up and see the differences between how the two were brought up by their Cepans. While Cepan of Four, Henry, was quite endearing and seemed very sure of himself and how to protect Four, we see a very different way from the way Nine’s late Cepan, Sandor, went about the business of protecting Nine.

For example, while Henry was all about small, quiet towns and living in the middle of nowhere, Sandor rented a completely fabulous apartment that was conspicuous one can hardly believe it’s a hide-out. And that tactic seemed to work because they managed to live in the place for five years. Nine admitted that it was his foolishness that caused Sandor’s death and his imprisonment.

Despite being edgy and somewhat of a jerk, you’ll find yourself liking Nine more and more. He and Four conflict several times but it’s all because of his passion to go back to Lorien and see it rise to its glory – as the Garde are meant to do.

Meanwhile, Six, Seven, Ten, and Crayton go to India where they believe another Garde, Eight, is hiding. When they get together, Eight reveals several fantastic powers but on their way to meet Four and Nine, Crayton died from an attack of the Mogadorians. Six, Seven, Eight, and Ten struggle to teleport to America where Four and Nine are but Six got separated and landed on terrible hot water, answering several questions yet leaving us wanting for more.

I was really anticipating The Rise of Nine because I thought The Power of Six was great and it was such a cliffhanger. I really thought this was going to be the end, but I suppose there’s more to the story. The book was good but I just finished it because I was hoping that it’s going to be the end, that I’m finally going to know what will happen in the end.

In this book, a new character was introduced – Eight. In India, he let the people believe that he is the reincarnation of Vishnu because he was starting to feel lonely and he wanted the companionship. Despite being very powerful, I did not find myself as intrigued by him as I am with Nine. He’s quite playful but when it comes down to the wire, he’s right there along with the rest of them, killing Mogadorians.

We learn more about Nine in this book and for me he’s still a work in progress. He has all this different aspects to him and he seems to just keep proving your opinions about him wrong. He’s usually this cocky guy with an attitude but he proves himself to be loyal and a humanist. Plus, he certainly has your back.

Of the three girls, Six is perhaps my favorite because she’s just really bad ass. Though nothing really new was discussed about her, I still like her the most. She is so capable both of leading others and of fighting on her own. Plus, she’s so brave and kind. I’m always a fan of strong women who take no crap.

I don’t know if it’s just me but I didn’t enjoy it as much as I thought I would. It had the same elements as the previous books – action, a hint at romance, suspense, and heartwarming friendship – but I felt like the story is getting prolonged. I would prefer getting four-five hundred pages per book and finding out more than being fed bits and pieces that just isn’t enough to sate your hunger and inspire thirst. However, I still recommend you get a copy of the book and read it for yourself because the story is interesting nonetheless and vital to your understanding and knowing the characters for your enjoyment of the next installment/s.
Email ThisBlogThis!Share to TwitterShare to Facebook
By Goldie at 1:30 PM