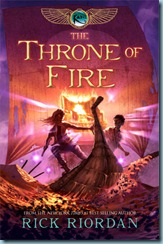 I almost forgot to do a review of this book!  I actually had the book since May (a graduation gift from my sister) but I put off reading the book until I can finish Hunyango sa Bato (which I wrote about here).  It was a good enough motivation and I finally got around to finishing the book last Saturday around 1am.  Then things just got so hectic and yada-yada-yada.  So the book.

First off, I will summarize the plot (which is slightly a first) because I feel like it can be summarized:  Sadie and Carter are once again attacked by the enemy, which is clearly Apophis, through various agents.  They had to go through several challenges to prove themselves worthy on their quest to awaken Ra, who, only disappoints as he has become senile.  And yes, the book ends with that idea.  Carter finally, FINALLY, finds Zia but she does not trust him and they end up having awkward moments between them.  The book ends with Amos becoming the head of the House of Life, a senile Ra is awakened, Sadie & Kane get through it unscathed, and Zia still has no clear purpose.

Well… as I previously mentioned in my review of the first book, The Red Pyramid, I just wasn’t a fan of the manner of story-telling in the book.  For those who haven’t taken a peek at the Kane Chronicles yet, the story is basically told by the two siblings, Sadie and Carter Kane, in which the book is the transcription of their recorded version of events.  This manner is carried on until the second book.  However, I realized it’s not just the manner of story-telling that fails to arouse my interest.  For example, with Meg Cabot’s The Boy Next Door became one of my favorites, despite the similar (but not identical) manner of story-telling.  The plot is fine, the story-telling can grow on you, so what’s missing?

I would suppose it’s the story itself as the book just lacks that “chemistry” that could make it into a spectacular best-seller.  I must admit I had high hopes for this book, I thought that like the Percy Jackson series, the book would actually improve.  But for me, it didn’t.  I just felt like the story was taking forever, especially the part about Zia.  If Rick Riordan finally revealed in Book 2 what Zia’s real purpose was, I think I’d be more excited about Book 3.  A teaser would be nice, yes?  But there’s no teaser, no hint of what’s to come.

But yes, I actually finished the book because I thought Zia’s purpose in the story would finally be revealed.  I ended the book feeling frustrated and a little guilty that my sister spent money for this book.  I can’t say that maybe I’m just too grown-up for this book because I’m actually very excited for The Lost Hero’s sequel, which is also written by Rick Riordan.  Besides, a lot of my favorite books are actually YA (Young Adult).  But then again, it’s just me and maybe there are others who particularly rave about the book.