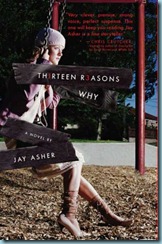 This book is one of those spur-of-the-moment purchases when I dropped by National Bookstore.  Then I saw a copy (the last copy), purchased it, went home and sat down to peruse the first few pages.  The next time I looked up, I saw that 20 minutes have already gone by and I’m already in my 31st page.  Yes, it was that gripping; it was that good.

I was slightly hesitant to read the book because I tend to avoid stories that deal with very serious matters.  After all, I read nowadays primarily to escape the stress from work so I’m more inclined to read comedic or magical fantasy stories.  However, I have no regrets whatsoever that I bought and read the book.

The story revolves around the thirteen reasons why Hannah Baker committed suicide.  Before she did it, however, she made audio recordings of the thirteen reasons caused by several people, pushing her to commit suicide.  She sent the tapes to the first in the thirteen reasons list and she took precautionary steps that will ensure that the tapes will be passed on from one person to the next.  The main character who narrated the story is Clay Jenkins, one of the people who is part of Hannah’s list.  Clay was surprised because he wondered how he could have hurt Hannah enough for him to be part of that list.  The story unfolds to reveal unexpected twists surrounding different characters, thus exposing the really dark sides of these people that Hannah experienced.

For me, the book was an eye-opener on how the mind of a suicidal works.  I was able to sympathize with Hannah, although I do not agree that what she went through was sufficient for her to lose all hope.  However, being a teenager, I think she must have been very susceptible to those depressing thoughts, added to her low self-esteem.

Aside from the plot itself, the narration was flawless.  The story flowed smoothly from one story to another.  The story is all connected together and there was not a point where I found something unconnected to what was previously said, as some books tend to do.  The whole story comes together into one real, deserving best-seller.

Yes, I will recommend this to adults, not to children or impressionable young adults because death, especially suicide, is an emotionally-heavy topic.  Furthermore, there are sexual tones to the story.  However, the sexual scenes are relevant to the story, which given the tone of the story, does not come off as perverted but rather gives more weight to the distress that Hannah was experiencing.

I give this book a five-star rating without a doubt.

Happy reading!
Email ThisBlogThis!Share to TwitterShare to Facebook
By Goldie at 10:07 AM