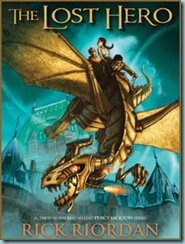 It was my 23rd birthday last Sunday, on the 23rd.  I asked my mom to give me a book and I gave her three choices: The Lost Hero or The Red Pyramid both by Rick Riordan or The Alchemyst by Michael Scott.  It didn’t matter which one she was going to give me because I planned on buying these books anyway (plus Shadowheart by Tad Williams because I really liked the Shadowmarch series).

When she gave it to me on the 25th, I actually screamed in happiness!  Being 23, I rarely ask my mom for things.  Usually, my boyfriend buys them for me or I do.  I pay for my clothes, books, food, shoes, my phone, etc.  So I felt like such a kid again when my mom handed over a book!  See, she always bought me books before when I was younger but when I started having my own money, she stopped.  After all, it’s not really cheap to buy books for a bookworm.

Moving on…I finished the book yesterday (26th).  I tried my best to prolong the book (at least 3 days).  By 7pm, I was halfway through the book and by 11, I was done.  I groaned in agony for a number of reasons.  First, I groaned because I finished the book too fast.  My boyfriend finds my “speed-reading” amazing (case in point: HP7 overnight) but it is actually agonizing because that means I’m constantly buying books.  I read e-books every once in a while, mostly the romance novels, but I still buy books mostly.  It is such a drain on my finances and trust me, I don’t have a lot.

Second, it was so good that I got so excited for the second book, The Son of Neptune, which will be released in Fall 2011.  Living in the Philippines, that means our bookstores will only have the books around December (winter), and that’s just if we’re lucky.  This also means that I’m going to contact my favorite bookstore, reserve a book, and race there like I did with the 7th book of Artemis Fowl (I’m proud to say I’m the 2nd [if not the first, they weren’t sure] to own that book here in the country).  It was stressful and euphoric, nonetheless.  So that means I’ll be waiting 11 months just to get my hands on the next copy.  And 11 months, for a good book, is a really long time.  I also saw from Riordan’s website that he’ll be releasing books 3, 4, & 5 every Fall per year (2012, 2013, & 2014).

So let’s get down to business.  I’m sorry to tell the Percy Jackson lovers that I found this book better.  The writing still had that Riordan style I’ve come to recognize – quirky with lots of pop references and slightly humorous – but it was written better.  I didn’t find myself saying “pffft” with the story-telling and the villains were not very obvious (okay I figured it out immediately because of the references to ‘mother earth’), like I did with Percy Jackson.  The book was written fluidly and it automatically transports you from reality to the place wherever the main characters were.  Rick Riordan, you are improving and I am excited for your other books.

The plot revolves around a lot of characters that I can’t pinpoint which one is really “the” character for the series.  I’m guessing it’s Jayson (and yes, I figured out the connection easily) for book 1 but for book 2, well it remains to be seen.

The story starts with three friends: Jayson, Leo, and Piper.  Jayson wakes up with no memory at all but Leo and Piper insists that they’ve been friends the whole term and that Piper is more than just his friend, if you know what I mean.  After an attack by storm spirits, they were rescued by Annabeth (hooray!) and Butch, a new character.  They are brought to the improved Camp Half-Blood and Leo is immediately claimed by his father.  Piper takes a while to be claimed (and I was surprised actually) while Jayson…he seems to have been claimed already but not in Camp Half-Blood.  Together, the three of them set out on a quest to rescue the missing goddess because the earth is rising up to destroy Olympus (yet again).

If you can remember in book 5 of the Percy Jackson series, the Last Olympian, Rachel Dare gives the first Great Prophecy as soon as she accepts her role as Seer.  And if you remember, there will be 7 half-bloods, the greatest of their age, who will save Olympus and the world.  Now, these 3 are obviously part of the 7, plus Annabeth in the end.  The book leaves you hanging as to who the remaining 3 half-bloods are.
What, no Percy Jackson?!  Well, he’s actually missing in book 1 but the story ends with the campers finally figuring out where he’s staying.  The story actually has a nice twist that just leaves you wanting more.  And no, not once did I mention the twist here in this entry.  You gotta get a copy of the book and read it from end to end.

Sorry, no other clues here but I can tell you the ending of the plot nicely capped off the loose ends and questions presented throughout the book.

It was a very satisfying book for me and definitely got me looking forward to the next books in the series.  Is it worth the penny?  No, it’s actually worth more than the price because it’s really exciting.  In fact, I would love to get it in hardbound but there’s no copy of that available yet.  Yes, you can let your children read it because it’s all good, clean fun.  It’s also action-packed and I actually found myself learning more about Greek mythology.  So go ahead and grab your copy now!

Ciao!
Email ThisBlogThis!Share to TwitterShare to Facebook
By Goldie at 1:33 PM