Review: The Alchemyst [The Secrets of the Immortal Nicholas Flamel] 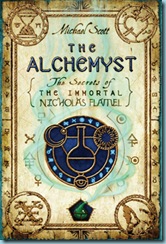 I’ve been wanting to read this book since last year since I wandered into Powerbooks at MOA.  The salesman dogged me and tried to sell books to me, suggesting so many books.  Typically, he pegged me as the type to be into vampire-romance novels, which for the exception of Buffy, I am not.  I refused all his suggestions until I came to this book, The Alchemyst.  I realized it was the same book that my boyfriend kept insisting that I should read but since I’m not the type to read a book just because someone says so, I never really took his advice.  However, I became mildly curious because four books are already published, meaning I don’t have to wait for years just to finish the set.  I then decided to put it under my mental list of “possible” books I would read if I ever find a copy or if I can persuade someone to give it to me for Christmas.

To cut the story short, I managed to persuade my dad to give it to me for my birthday.  Truth be told, I put off reading the book until yesterday although I had the copy since the 30th of January.  I was afraid that the book might not live up to my expectations and I’d regret the P339 my dad paid for it.  Finally, I gave a big sigh of surrender and read the book.

Now I’m done with the book and the most I can give it is a 4 1/2 star rating because I didn’t get hooked on the book.  I didn’t feel the same drive that I usually get from exemplary books.  I’m not driven to insanity because I don’t have the second or third books.  But I enjoyed it.   The plot is actually great, different, and informative.  The story was fast moving, at times too fast but well-paced.  I actually lament that it’s too thin.  I put the blame on the story-writing because I didn’t feel so involved with the story.  I felt like the writing was too plain.  The book was not written in a manner that could whip the reader into a frenzy.

The story revolves around Nicholas Flamel and the twins Josh and Sophie and a book written by Abraham the Mage.  The book, nicknamed the Codex, contains a multitude of secrets which would bring forth the end of the world if the villain gets his hands on it…and the villain, Dr. Dee, does.  Nicholas Flamel, posing as Nick Fleming, was the guardian of the book and was hiding from Dr. Dee as a book-keeper in a non-descript place in San Francisco.  Josh Newman was working there for the summer and right across the bookshop, Sophie was working in the coffee shop.  One afternoon, Dr. Dee attacks Nicholas Flamel, gets his hands on the book, and steals Perenelle Flamel (wife of Nicholas).  However, Josh manages to rip off 2 vital pages from the book, thus setting Dee on their tails.  Nicholas Flamel tries to bring the twins to safety because he figures out that the twins are the twins said in the book that will change the world.  The book then details more about their adventure and sets the shaping of the twins into their destiny.

I like that the book tells you to not always rely on what you know.  I like that it reminds you that what you know now may not always be right.  There are so many secrets in the world that are yet to be uncovered and they just might shock you or even change how you view the world.

The book discuses several gods and goddesses, not concentrating on any particular mythology (Egyptian, etc.).  Furthermore, the author also claims by the end of the book (not part of the story) that the stories of Flamel & Dee are real (but since this is a fiction book, I don’t know whether to believe him).

The Alchemyst is the first book in the series of The Secrets of the Immortal Nicholas Flamel and right now, the fifth book in the series was just released.  Although I did not enjoy the story-telling, I am excited about the plot itself, which would be enough for me to get the second book.  The story has great elements: adventure, new information, friendship, and family.  It’s a great story for all ages and highly enjoyable.

All in all, I would recommend the book.  The author’s writing style might just not be to my liking and you might find yourself enjoying the book more than I did (I hope so!) so it’s a good buy.  Plus I’m quite anticipating the twist of the story and I’m curious as to what Josh will do in the next books.   I’m planning to get the second book because I’m hoping that the writing style and plot is more interesting, thus meriting five stars.   Here’s to hoping.

Email ThisBlogThis!Share to TwitterShare to Facebook
By Goldie at 11:55 AM