2-in-1 Review: The Magician and the Sorceress [The Secrets of the Immortal Nicholas Flamel]

Last Saturday (Feb. 12) I chanced upon Powerbooks and they had a sale!  I immediately rushed in and asked for this book and the saleslady gave me these two books.  I hesitated because it’s still expensive even with the discounted price.  However, I just closed my eyes and pretended that my wallet wasn’t screaming in agony.

I managed to finish the two books last Valentines Day and I am burning to get the fourth book…and the other books after that.  I decided to write my a 2-in-1 review for the two books because I have the same opinion about them.  Obviously, given the five stars, I loved them! 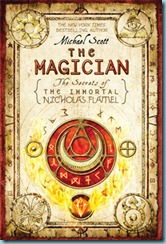 In The Magician, Flamel and the twins, with Scatath manage to escape Dee and arrive safely in Paris…but not for long.  With the numerous agents of the Dark Elders, they are quickly surrounded and challenged by another immortal, Machiavelli.  Thankfully, Sophie managed to use her power enough for them to escape and hide.  Meanwhile, Josh is becoming increasingly envious of Sophie’s powers.  While Sophie admits to wanting things to go back to the way they are, we see Josh as increasingly becoming hungry for power.  He feels that he must be Awakened too because he feels that there is now a gulf between him and his twin.

In this book, Sophie learns the the element of Fire.  This only increases Josh’s envy of her powers.  However, an attack on their safehouse leads to Josh having to defend Scatath using a sword…and thus experiences the first rush of magic.  This only leaves him wanting more, thus making him even more vulnerable to Dee and Machiavelli.  However, while they successfully beat this ‘unbeatable’ beast, Scatath is attacked and separated from the twins and Flamel. 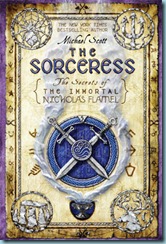 In The Sorceress, Perenelle’s prowess is further revealed as her experiences in Alcatraz are shared with us.  But Flamel and her are growing each day and they’re running out of time.  The twins, now both awakened (and I’m not going to reveal who awakened Josh!) must learn the element of Water… but the teacher is insane.  If he’s insane, will he be able to teach them the power?

With Dee’s failure to capture the twins and the two missing pages of the Codex, he now becomes a desperate man…hunting the twins is now a life-and-death situation for him.  Literally.

Will one twin turn on another?

Which twin will destroy the world?

If in the first book, I wasn’t too sure about this series, these two books changed my mind.  The book is definitely action-packed with a lot of interesting twists and interesting characters.  I love the usage of historical characters here and the real places mentioned in the books.  Although the chapter-enders are not very intriguing, they are still interesting and there are still some definite page-turners.  My blood was racing to finish the book and find out what happens next?  What happens next?  And as Dee and Machiavelli kept wondering, what/who exactly is Perenelle Flamel?

I would recommend the books as a good buy, if not for the style of writing.  It’s a bit exciting and really action-packed and very intriguing but Scott really needs to work on his chapter endings.  Needless to say, he improved in these books which made them more enjoyable to read.  I’m holding out for the next books and I’m hoping that he’s already excelled by then!

Email ThisBlogThis!Share to TwitterShare to Facebook
By Goldie at 8:25 PM