The Necromancer [The Secrets of the Immortal Nicholas Flamel] 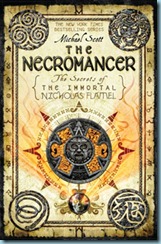 I managed to convince my boyfriend to share the cost for this book with me last Saturday and I do not regret forking over my last money for this book.  It was money well spent and I consider it to be the best written book in the series yet.

In the fourth book (yes, fourth already!) the sister of Scatath appears in the picture, Aoife.  But she’s not just her sister.  They’re actually twins who fought thousands of years ago over a boy and they parted ways.  However, Aoife has regretted their dispute and loved her sister all these years.  When she felt that Scatath disappeared in the world, she looked for Josh & Sophie and actually ‘kidnapped’ Sophie so that they can talk – or so she said.  Josh reluctantly approached the Flamels to help him in getting Sophie back.  The Flamels managed to convince Aoife to join them in defeating the Dark Elders but only because she really wanted to get Scatath back and make amends.

Meanwhile, Saint-Germain manages to get to where Joan of Arc is…with no way to go back.  There, they met the one who gave Nicholas Flamel the Codex, the one who told Perenelle Flamel her future & her role, and the one who taught Saint-Germain how to master the element of Fire.  I’m guessing it’s Abraham the Mage but I’m not sure yet because the book ends with no other other clues to his identity.

Dee has become more desperate but managed to find an ally in his long-time acquaintance Virginia Dare because he promised her the world.  With his life and immortality hanging on the balance, he attempts a dangerous move which endangers both the Elders and the humans… and manages to completely turn one of the twins to the dark side.

All in all, the plot for this book is just fantastic.  My heart was actually racing the whole time in anticipation and I just couldn’t put it down!  I wanted to know what happens next and Scott just delivered even juicier details…with no relief!  I must highly praise Michael Scott with this book because his writing style has really improved.  He finally delivers a book in the series that really makes me very anxious for the sequels (the next book will be out on May 24 this year so I suppose it will be here in the Philippines around July-August although I’m hoping it will also be here by May 24!).

I am driven insane by the character of Perenelle Flamel!  I’m fascinated by the development of the characters of Perry, Sophie, and Josh.  I also love that there’s no gender bias whatsoever between male and females, as they are both portrayed as equally strong and capable.

The series has taken quite a darker turn than the previous three books as Aoife seems to be eternally lost to since she sacrificed herself to forever fight with the dangerous enemy Dee indirectly unleashed.  Furthermore, one of the twins has turned over to the dark side.  Just to make it even more interesting, I’m not going to reveal the twin who flipped.  Although if you’ve been reading the past three books, it should not come as a shock because the elements and clues were planted all throughout the series.

If I previously hesitated to suggest the series to you, with this book I’m not holding back.  I’m very happy and proud that I’ve got the complete series in my bookshelf.  Michael Scott, two thumbs up!

Email ThisBlogThis!Share to TwitterShare to Facebook
By Goldie at 5:09 PM