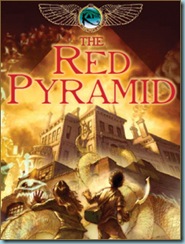 So I just finished the first book of the Kane Chronicles, The Red Pyramid, by Rick Riordan.  As you can see, I only gave it four stars because I did not enjoy the book as much as I enjoyed the Percy Jackson series and The Lost Hero of the Heroes of Olympus series.  But still, the plot was good, interesting, and it actually started a desire in me to start reading up on Egypt mythology.  Although the term ‘mythology’ seems to be a misnomer because the book presented the Egyptian gods & goddesses to be very believable.
The story revolves around the Kane siblings, Carter and Sadie, who apparently are descendants of two families of pharaohs in ancient Egypt.  They are the first to be born with two pharaoh bloodlines and it makes them very powerful and highly capable of hosting Egyptian gods or goddesses.

However, they remain unaware of this until they see their father make a spell that turns bad, thus making the Rosetta Stone explode (yes, the one with hieroglyphics) and the siblings are suddenly whirled into a new world of chaos.  Apparently, at the same time that the Rosetta Stone cracked, their father mistakenly released all the five children of Nut (the goddess of the sky in Egypt lore).  Set, a very powerful and power-hungry child, started building a “red pyramid” to gain tremendous power and wipe out the earth.  The two children set out to destroy Set and when the time for his destruction arrives, Sadie realizes that he is not their enemy.

Well go buy or borrow a book because I won’t tell you.

Sounds all very exciting right?  Actually, the plot is okay and intriguing.  I like the fact that it’s about Egyptian gods this time and frankly, I haven’t read much about them so I’m now very intrigued.  That’s one of the things I love about reading good books – they open your eyes to new ideas, they get you intrigued with new books, and they add to your knowledge bank.  While the Red Pyramid was quite instructive about the gods and goddesses, I found myself not accepting them as true and felt the desire to know the truth build up inside me.  It’s not that I don’t trust Riordan’s knowledge or research, it’s more about the fact that the book is fiction.

I only gave four stars for this book because of the way the book was written.  It was written through two viewpoints: Carter and Sadie’s.  I’m not a huge fan of reading chapter titles, I just go straight to reading the story so there were a lot of times when I’d suddenly get confused as to who’s telling the story.  Furthermore, there were a lot of inserts/comments by the other character that I felt was unnecessary and distracted me from the main story.  For example, if Carter was narrating the story, there would be comments by Sadie inserted in the story line which annoyed me after some time.  I mean, I just wanted to know what’s going to happen next!  But the inserts, they keep getting in the way.

However, I suppose that is Riordan’s style of reinstating his slightly humorous approach to story-telling.  Telling a story about wars and slightly-heavy story drama do need to be light, especially for young readers.  He just remained true to his style but this reader just did not find the format to her taste.  Others may have enjoyed it but I did not.

Another thing I didn’t like about the book was because I found myself a little bored, almost to the point of just giving up on the book right from the start.  However, I persisted and found that after a couple of chapters, the story becomes more interesting.  I can’t say that I was hooked but I did finish the book because I wanted to know how everything turns out.  I felt like the book was too long and the story was getting kind of lagging but in the end, the story turned out to be quite satisfying.

The second book will be released this year, entitled The Throne of Fire.  I don’t know if I’m going to buy the second book brand-new or secondhand.  I will probably buy the book because I want to know if it will be more interesting and I want to complete the set anyway.  Do I recommend this? Hmmm I’m on the brink of saying no but at the same time, the story might be completely captivating for others.  Furthermore, the ancient Egyptian gods suddenly started to become more interesting for me and I like that the book was written well enough to inspire that.  I suggest you borrow the book instead or read up on more reviews before you make up your mind.

Email ThisBlogThis!Share to TwitterShare to Facebook
By Goldie at 1:04 PM