Last Saturday, I watched Rekorder with my sister and friends in CCP. It ended pretty early, and we had some time to kill before we had to go our separate ways. We were supposed to eat at the Harbour, but since it looked like it was about to rain heavily, I managed to persuade them to attend Lucy's celebration of her Third Birthday in Fully Booked at the Fort. I also wanted to pick up my prize, since I was one of the winners in the #blinddatebooks. I was so surprised! I rarely win contests; I'm not the lucky type.

My friends and I had such a blast, but we don't have photos unfortunately! I hope the crew from Fully Booked will post the photos, though :) We played all three games, and they were such fun! I wish they set up more games for us.

The most exciting part, however, is that you get to choose a free book if you win any of the games. Each book was wrapped prettily in colored paper, with only a description in the front.

My sister's book (the one in orange) had the description: Seven Wonders of the Ancient World, Young Hero, and If you like Percy Jackson. Mine was Girl discovers she is an experiment in artificial intelligence, chase, if you liked I Am Number Four. The parody yummy chicken is the description for the #blinddatebook choice #13.

When I saw my sister's book, I said, "Oh! Pick that one, I know that's the Colossus book and I'm sure you'll like it." I picked mine, thinking it was a book by Kady Cross. I mistakenly thought that the #blinddatebook I got was something from the Chicken Soup for the Soul series. 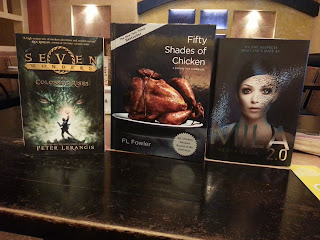 My sister got The Colossus Rises by Peter Lerangis, I got Mila 2.0 and the #blinddatebook prize was Fifty Shades of Chicken. Score on the first two books! I honestly have no idea about Fifty Shades of Chicken, this is the first time I've heard about the book. And for someone who hasn't read (and doesn't want to read) the Fifty Shades trilogy, this was quite a shock for me. Actually, I had a mistake because I was supposed to choose book #15 but I got #13 instead! Still, the recipes are pretty interesting and the titles are so naughty! I think I'm going to have a riot while going through the book.

All in all, it was a good haul, and a pretty interesting weekend! How was your weekend, lovies?

Email ThisBlogThis!Share to TwitterShare to Facebook
By Goldie @ My Book Musings at 9:57 PM