Review: I Am Number Four 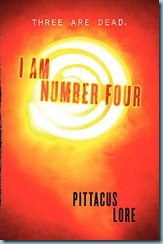 I actually watched the movie before I read the book and I loved the film! I actually wasn’t planning on reading the book anymore because I already enjoyed the film, but my sister said it’s actually a good read. So I went ahead and read the book…and read The Power of Six soon after. But I’m getting ahead of myself.

The story revolves around the “9” aliens or Lorics from the ravaged planet Lorien. They are called “Garde” because of their special powers, called Legacies, which not everyone has in the planet. They came here with their guardians who are supposed to keep them safe because they’re the ones who will someday save the earth…and get Lorien back.

Unfortunately, their enemy, the ones who ruined Lorien followed them to earth. The 9 are protected by a special charm that allows them to be safe as long as the one preceding them is not killed. They can only be killed according to their number. Unfortunately for John, number four, the first three were already dead. The story actually revolves around number four (duh!) and the story slowly unfolds as to their history. The plot also slowly reveals the powers that John has inherited from the elder Garde.

John has never really developed any close relationships with other people except for Henri, his guardian. However, once he got the signal that number three is already dead (they get this searing pain and mark etched on their flesh. Dark Mark, anyone?), he and Henri decided that it’s time to go. They go to this sleepy town called Paradise in Ohio and there, he meets Sarah Hart (played by Dianna Agron in the movie. She’s actually the reason why I watched it hehe!) and like every other movie with a teenage boy and a teenage girl, they fall in love. Everything goes peachy until the Mogadorians track them and they had no choice but to fight.

Go read the book. I swear it’s a good read.

The only thing I didn’t like about the plot is that it felt a bit too dragging especially on the part where he and Sarah were growing more in love. Furthermore, the sudden entry of a “surprise” character in the end just really caught me by no surprise. It was good, perhaps it was needed, but there was no foreshadowing at all and it just felt confusing.

The story has all the elements of a good read: light humor, action, adventure, and a bit of romance. There is also the play on family ties and solid friendship. I liked the way it was written because the friendship and romance didn’t feel shallow to me. I think John’s relationships were really established, which helped cement the emotion behind the succeeding scenes when Henri died and when his new friend Sam Goode stuck by him till the end.

It’s a good read for anytime of the day and I recommend it. Although, perhaps it would be best if you lay off it while you’re at work

Insert: I’ve been reading a lot of romance (chick lit, historical romance) books, but I’ve only written two for chick lit (Meg Cabot, check them out here!). I’ve been thinking of writing about them since I read a lot of them. But that’s just a thought!
Email ThisBlogThis!Share to TwitterShare to Facebook
By Goldie at 11:58 AM