Review: The Warlock [Secrets of the Immortal Nicholas Flamel] 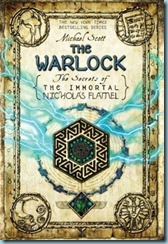 
My heart pounded as I eagerly awaited the release of the 5th book.  I didn’t know when it was released in the Philippines exactly (since I was expecting the book to arrive around July) but by June, there were already copies in various bookstores!   The hardbound copies were easily sold out.  Thank God for my very sweet sister and boyfriend who surprised me with a hardbound copy.
I will say it now and I am not hesitating to do so: The Warlock is easily the best book in the series.  The only complaint I have about it is that it’s too short.  When I finished the book, I knew I’d be waiting like crazy for the first copies to reach the Philippines.  I want to get my hand on the last book – FAST!  I hope it’s already in the works, Michael Scott!

The Warlock just blew my mind.  It contained a lot of twists and turns that I didn’t expect.  Furthermore, there were a lot of heart-pounding action (although the actual imagery was hard to imagine because it was unusual).  Josh finally chose a side and Sophie chose another.  Nicholas Flamel is about to die and Perenelle gives up one day of her life to give Nicholas one more day to help save the world.  Throughout the series, there were hints dropped that Perenelle had a big role to play and in this book, the story is now revealed.  A minor character, who I expect you never even thought of until now, is suddenly elevated into a major character.   The book ends with the revelation of who Dee’s masters are and it will twist everything you know about the story.  The ending made my jaw drop in surprise because it was really unexpected!  The story is clearly for young adults because there are some violence and fighting so better save these books for older children.  The book is funny, bordering on heavy and light-hearted, and incredibly exciting.

Unfortunately, we still don’t have any idea how the story will end.  Until the end of the Warlock though we still don’t know which twin will destroy the world and who will save it.  But I’m thankful for that because it makes me look forward to the last book in the series, the Enchantress.  The last book is purported to be released in 2012.  I’m so excited!

Meanwhile, go to your nearest bookstore and grab a copy of this amazing book.  While you’re at it, try getting a copy of the previous books.  Mad About Books is selling a TP copy of The Sorceress.  Read my review about the other four books in the series by clicking on these links:

Book 1: Secrets of the Immortal Nicholas Flamel
Book 2 & 3: The Magician and the Sorceress
Book 4: The Necromancer

I hope you’ll enjoy the series!

Ciao!
Email ThisBlogThis!Share to TwitterShare to Facebook
By Goldie at 8:47 AM