I've read Playing Autumn a year or so ago. I really enjoyed Mina V. Esguerra's new adult novel, even thought it was quite different from what I've been used to reading from her. Now she's turned the book even steamier, which makes Playing Autumn even more exciting to read. However, I don't like the cover because it seems like it should feel steamy, but I'm not enticed.

But let's get to the meat (heh - yes, pun intended) of the story. Don't forget to join the international giveaway if you want to get your hands on a $20 Amazon gift card!

Haley Reese is going back home to Houston and she's dreading this trip. She volunteers as a mentor to young musicians at an annual festival, and the longer she's been doing it, the more she feels like a fraud. It's been years since the web videos that made her sort-of famous first came out, and she hasn't done anything else to pursue the career in music she's always wanted. Things start looking up when she shares a plane ride with Oliver Cabrera, music prodigy, rock star, and the reason why she picked up an instrument in the first place.

Oliver Cabrera hasn't called any place "home" since he started touring professionally in his teens, but Houston is as close to it as any. He's also nearly broke, his career just about over. When he gets the invitation to mentor at the Breathe Music Festival again, he decides, what the hell, he should finally show up. He meets Haley, Hot Piano Girl herself, and finds her own fear of failure might be easier to fix than his own.

Playing Autumn was first released in 2013 in the Rock Gods of Romance ebook anthology. This is a revised, expanded, and steamier edition.

It wasn't a full flight, and he was relieved to see that she had her row to herself. So as soon as the “fasten seat belt” sign was off, he jumped out of his seat and asked to join her.

“Are they going to let you do that?” she said, but it looked like she was going to, anyway.

Oliver took the aisle seat, leaving the middle free, hoping the gesture made her feel that he wasn't a creepy seat-jumper. “I do this all the time,” he said nonchalantly. When he was a kid, yes. And when he flew coach. Both those events were separated from today by more than a decade.

He buckled up, tossing her a smile as she watched him, and settled in.

She was smiling all right, but it was the cautious smile of someone looking at a rattlesnake. “You're going to tell me what this is about, right?” she said. “Because I can press a button and those flight attendants will be so on you.”

“Haley, I'm Oliver. What you're doing is helping someone who has, um, quirks whenever he has to travel like this. Believe me, you're being a hero right now.”

She frowned a little. “Is it a fear of flying?”

“No no no, nothing as simple as that,” Oliver said. He took a deep breath, and might have inhaled some of Haley's perfume at the same time. He had no clue how to identify the stuff, but it smelled good. Comforting. Clean. He felt the nerves start to go away. “It's more of the not knowing who I'll be sitting with.”
“What?”

“You mean if you knew whom you were sitting with, you'll be okay?”

It looked to him that Haley's wall had started to come down, and maybe she wasn't going to sic the flight attendants on him after all. “So why do you still travel alone?”

“I try not to. This one couldn't be avoided.”

“Okay.” She looked like she was going to start reading her magazine again, but then: “Are you like this in buses too?”

He usually did not want to talk about this, but what the hell. He owed her that. “And trains.”

Oliver shook his head, taking another deep breath. “You don't understand. If I take an empty row, the next three hours I'll be obsessing about who might move to my row. There will be dread.”

“So your solution is to move to my row. The one I had all to myself.”

He'd been like this for as long as he could remember, after what he suspected was an incident at a school bus that he'd blocked out. But his parents were professional musicians who performed across the country all the time, and he had flown with them often, so who knew when and where it actually happened.

“No one's going to take the middle seat,” Oliver said, “And I'm comfortable with you now. Trust me, this is the best way for me to take this flight, without freaking out.”

“This is so weird,” Haley said, but now she was amused at least. “What an odd phobia.”

“It's not a phobia,” Oliver insisted. “It's a thing. A problem. That you've already helped with. Are you visiting or going home?”

“Oh. Both, kind of. I grew up there, but live in Tampa now. Since the summer started, anyway.”

“Do you work there?”

Haley set down her reading material. “Yes, I do. I'm a tutor for the kids of a really rich family. What are you doing now, Oliver?”

She bit her lip and her head shook a little. “I know who you are, Oliver Cabrera. You can't be doing nothing. Aren't you in the middle of a tour right now, writing new songs, something like that?”

Then, a new sensation. He felt embarrassed that she knew who he was. For years that was not the case. He had taken it for granted that every attractive woman he'd get to talk to would know who he was, and was even talking to him because of that fact. It was the future he had seen for himself, as the pre-teen music geek, and he actually enjoyed it. Took pride in it. Indulged a little too much in it. 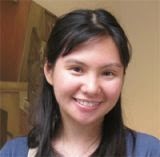 Mina V. Esguerra writes contemporary romance and young adult novellas. She has a bachelor's degree in Communication and a master's degree in Development Communication, put to good use in her work as trainer and content management consultant. Mina lives in Metro Manila, Philippines, with her husband and daughter.
She finds inspiration in the lives and experiences of other people, so the answer to "Is this story based on you?" is always, always "No."