I'm so excited to be sharing this excerpt from Gezellig 2: (un)breakable by Kesh Tanglao. It's a pretty sizzling book with the right amount of sweet and heartbreak. I hope you'll enjoy it as much as I did!

Lorin Perez’s life is finally back on track after almost losing it six years ago. She knows meeting and dating sizzling hot professional rugby player Spence Clarke is a huge part of her healing process. But with her father starting a new family, she decides to follow her best friend Caitlin to UK–Spence’s home country–and start a new life.

However, moving to UK brings certain complications in the form of Gezellig band member Nigel Whitmore, a.k.a. the one who didn’t follow through three years ago. And even though Lorin is very clear about her no commitment rule, Nigel ignores this and pursues Lorin like never before.

Caught between the man who made her feel safe and the one who makes her feel alive, will she finally be able to set her heart free and make the right choice?

“It’s rude to stare, you know, especially if you’re staring at my mates who are barely wearing anything.”

I jumped when I felt and heard someone whispering into my ear. When I turned, I saw him, also close to wearing just his birthday suit, but he didn’t seem uncomfortable. He had a body to flaunt. Muscles in the right places, broad shoulders, arms that I was scared would deck me if flung towards my direction—arms that I learned later on were very useful in giving big warm hugs.

And he had the nicest pair of eyes—eyes that reminded me of honey, eyes that were then looking at me with amusement.

“I—I wasn’t staring,” I defended. I took a step away from him because he was too close for my comfort. His breath smelled of mint and something sweet.

He gave me a cocky, lopsided grin, his eyes lit up. “Hmm. Okay. Maybe—” he paused, his face thoughtful—“ogling. You were ogling.”

He took a step closer, invading my personal space, and I backed off again. “You were drooling, too,” he added.

I panicked and felt for my chin, but there wasn’t any drool, much to my relief and chagrin. “I wasn’t!”

He chuckled. “Calm down,” he said softly. He reached out to offer a hand towards me. “I’m Spence Clarke.”

I just looked at his outstretched hand. It hung in the air between us for a few seconds, before he drew back, aiming to pocket his hand instead but there wasn’t anywhere to pocket it in—unless he wanted to put it in his briefs. He let his hand hang at his side instead.

“Tough customer,” he said with dismay.

I turned and walked away, but he popped up from behind me. “Okay, I’m sorry for accusing you of staring and drooling over the lads,” he said, catching up with me even though I quickened my pace. I was just a step ahead of him, and it was hard to stay in front of him because he was taking huge steps, and my knee was hurting already. “But you were.”

“I was merely appreciating the view, you know,” I snapped.

He glanced at the still ongoing shoot behind us. “You’re not alone, really,” he quipped.

I knew it was true; there were other ladies behind the photographer. Their clipboards were over their mouths, and their eyes were wide.

Spence turned to me. “A name, please? Your name.”

I stopped walking, and he crashed into me. He held me around the shoulders to stop me from falling on my face. As soon as I steadied myself, I shrugged his hands off my shoulders.

“Lorin,” I said. I was going to stomp off, but he blocked my way. I glared at him, but he didn’t back down, a smile still pasted on his face.

“Lorin,” he whispered, repeating my name. I huffed, but I knew it was just a combination of my usual pissed off disposition on Day of Mourning, my knee aching again, and my hormones.

Never, ever mess with a lady who has menstrual cramps.

Besides, I knew I was ogling his ‘mates,’ but I didn’t need it to be pointed out.

“Look, I still have a lot of things to do, so if you may?” I asked, and he finally let me pass, raising his hands up as if in surrender. I chose a seat and a table as far away from the actual shoot as possible, and away from the scantily clad boys, from the giggles of the women who acted like they had never seen such specimens, and away from Spence and his honey eyes. I set up my laptop and got to work.

A few minutes after the clock hit twelve, a plate of mac and cheese and chicken and a glass of orange juice slid onto the space next to my laptop. When I looked up, it was Spence, his smile now uncertain. He had a blue-collared shirt on, but only a towel was draped around his waist.

There was a caress in the way he said my name, which made me stop working. I thanked him quietly. Then he disappeared, and I almost regretted that I was treating him badly. I was starting to eat when he sat down next to me, a heaping plate in his hand, his smile less tentative.

“No one else to badger, Mr. Clarke?” I asked lightly.

Spence gazed at me intently, and I stared back, lost in those eyes. I don’t know how long we stared at each other, until I found myself smiling, blood rushing to my cheeks. I had to shake myself back to reality.

“Right,” I said. I reached over to his plate, grabbed his chicken breast and swapped it with the drumstick on my plate. He looked like he was going to protest—I found out after a few dates that he was like me, a purely white meat eater—but he didn’t, gazing at me as he got the drumstick and took a bite.

We ate in silence, and when the shoot was over many hours later, he asked for my number. I gave it without protest.

If you're wanting this book like right now, you have a chance to get it, plus other goodies! Good luck, and happy reading! :) 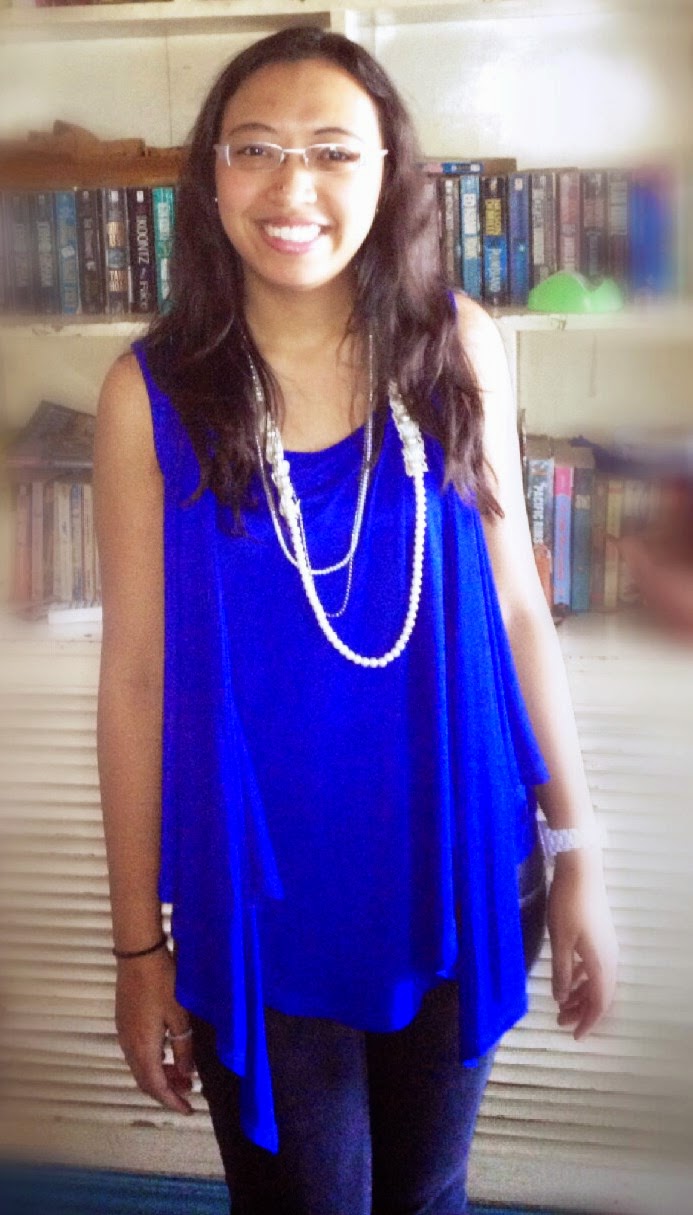 Kesh Tanglao is a full-time market researcher. When she’s not crunching numbers, she spends most of her free time watching TV shows, listening to music, and reading. Also a self-proclaimed fangirl, she likes cheering for her favorite sports teams and supporting her favorite artists.

Email ThisBlogThis!Share to TwitterShare to Facebook
By Goldie @ My Book Musings at 9:43 PM