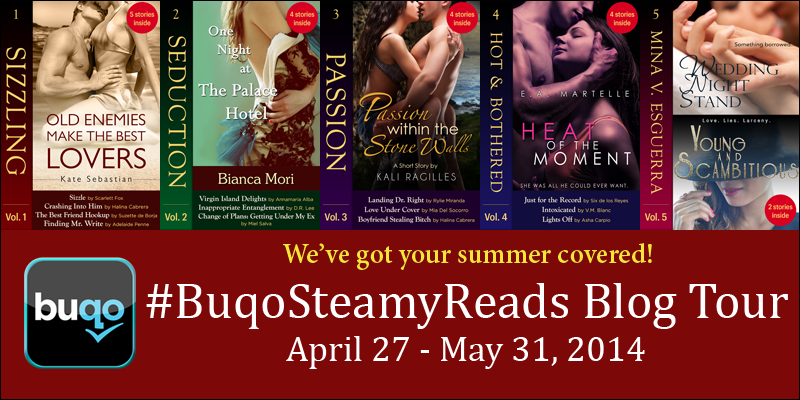 Welcome to my stop for the #BuqoSteamyReads Blog Tour! :) My second stop is for the Seduction bundle, Volume 2 of the four-book-bundle #BuqoSteamyReads as sold on Buqo. For readers 18 years old and up.
Today I'm featuring Inappropriate Entanglement by D.R. Lee. This book has a whole lot of hot, and definitely got me on teeters. Get ready for the steam!

“Where are the models?” I asked.

“Oh, uh, they’re waiting for you in the lounge,” the receptionist supplied.

I was scheduled to meet the prospective male models for the ad campaign for which I prepared a presentation, and because I was already late, I was positive they’ve been waiting for me.

I easily spotted three men sitting by the lounge. One was fiddling with his phone, another was reading on his iPad and the third one was reading a newspaper. I’ve worked long enough with models to pick them out in just a glance. If their tall height and trim builds didn’t give them away, their stylish clothes did.

Two of the men instantly stiffened when they saw me, but I wasn’t in the mood for niceties. I stood in front of them, crossed my arms on my chest and scrutinized each one. I had to find a man that would serve as the face for top clothing company Onyx Apparel. I was already late and I intended to do this efficiently.

Hmmm… The first one looked too young. His build was perfect but he looked too much like a teen heartthrob. The next one was too thin, and he simply didn’t exude the manly vibe that I was looking for. The third one -- as soon as I laid eyes on him, he looked up from the newspaper he was reading and met my stare full-on. I was pretty sure he couldn’t see my eyes as I was wearing dark sunglasses, but his stare was intensely penetrating. I involuntarily gulped and had the urge to look away. I knew then and there that I’ve found the man for the job.

Stamping down the attraction that was creeping under my gut, I quickly shuffled on my feet and walked away, fully expecting him to follow my lead. When I looked back, he just stood there looking confused. As much as I liked watching the dumbfounded expression on his face, I didn’t want to be delayed further.

“Well? Aren’t you coming?” I scoffed.

My voice seemed to have broken his confusion, but he didn’t say anything. He just slung his gray backpack on his right shoulder and walked on.

A few minutes later, we were inside the confines of my office. I took up my position behind my desk and took off my sunglasses. As soon as I turned my attention to him, I instantly felt like I’ve been sucker-punched. If he was a looker under the tinted lenses of my sunglasses, he was even more stunning under bright lights.

The hard planes of his face were finely sculpted and refined. His head was shaved but surprisingly, he looked good. His eyes were the lightest shade of brown and they were framed by thick, dark lashes. His nose was straight and aristocratic, and his lips looked luscious and inviting.

You’d think after working with models for three years in an ad agency, I would’ve been desensitized to gorgeous people. Hell, after the first year of being star-struck with the models and celebrity endorsers, I’ve began seeing them like mannequins. I thought I’ve seen them all. But this one… He was different.
The curious thing was that he wasn’t even doing anything except stand there with his backpack slung on his right shoulder. However, his mere presence was making me all too conscious of the sparkly tingles erupting in my stomach.

I had to bite my lower lip to keep my composure intact.

When his eyes strayed to my lips, I felt my breath involuntarily hitch.

I knew I was gawking at him. And I knew that he knew I was gawking because one curious eyebrow rose as he stared defiantly back at me. A small smirk also tugged at the side of his lips in amusement. His stare was unabashed and so intense that I just had to look away after I felt heat creeping slowly on my cheeks. Although I may have found the perfect man for the ad campaign, I just wasn’t so sure I could handle him. Then again, he didn’t know that and I wasn’t too keen on letting it be known.

I cleared my throat and took a deep breath before speaking.

“What’s your name?” I’ve dilly-dallied long enough. It was time for business.

“Alright, Matt, I’m Kaye, the Creative Director in charge of the campaign for Onyx Apparel. I’m already late so we’ll take care of the trivial things later. For now, put down your backpack and strip.”

“Excuse me?” He looked surprised, but amusement still lit up his eyes.

“I said strip. I need to see your build,” I explained, trying to sound professional.

Matt smiled and shook his head slowly as if in disbelief while he dropped his bag to the nearby chair. I could tell he was trying to suppress a grin. I was a little intrigued about what it was exactly that he found so amusing, but I reined in my thoughts and did not say anything.

Matt ever so slightly tugged at the hem of his black V-neck shirt before slowly pulling it up. All the while, he kept his gaze locked straight at me. I gulped. Those eyes should be illegal. He sported a small smirk while he slowly lifted up his shirt as if he was the star in a strip-show.

He was like unwrapping a Christmas present that I really badly wanted, but can’t get my claws on.
Off with the shirt, dammit!

When the shirt was finally off, I shamelessly gaped.

Holy David Gandy and the awesomeness of a thousand flying bacon! Those pecs! Those well-defined abs! I had to bite my cheek to stifle a squeal. He was perfect. His body was well-toned but not too bulky, and he had the right buns in all the right places.

I’m not a perv, but I would be lying if I said I didn’t enjoy his impromptu strip show and subsequent half-nakedness. In my defense, I am only human and thus weak against the personification of lust.

Oh, and what do you know, he has a tattoo. It was an intricate tribal tattoo covering his left shoulder and spilling unto his chest. It was mesmerizing to say the least and I felt a strong impulse to touch it. Unfortunately, before I could act on my abnormal impulses, I heard him speak.


On their first meeting, she ordered him to strip.

Kaye is the independent and workaholic creative director of an ad agency. She’s been single for five straight years but she still isn’t so keen on joining the dating pool anytime soon. Unfortunately, Matt, a hunky client she needs to please and appease, has other plans.

On their first meeting, he stripped.


Want more? Get the Seduction bundle at Buqo for only $3.99 or P180. That's already four steamy stories for your reading pleasure ;)

You have to download the Buqo app for your iOS or Android device.

Or join the awesome giveaway!

Email ThisBlogThis!Share to TwitterShare to Facebook
By Goldie @ My Book Musings at 10:33 PM