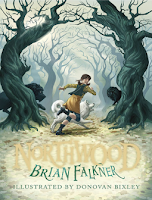 I decided to read Brian Falkner's middle-grade fiction story, Northwood, to cleanse my palate after reading so many romance and paranormal books this year. I haven't read middle-grade fiction in such a long time, and I kept asking myself how I could possibly relate to the characters when they're a decade younger than me. But Northwood just proved me wrong.

Cecilia Undergarment likes a challenge. So when she discovers a sad and neglected dog, she is determined to rescue him. No matter what. But her daring dog rescue lands her in deep trouble. Trouble in the form of being lost in the dark forest of Northwood. A forest where ferocious black lions roam. A forest that hides a secret castle, an unlikely king and many a mystery. A forest where those who enter never return. But Cecilia is determined to find her way home. No matter what.

Northwood is one of those books that reminded me that no matter how old I may be now, there is still that child in me that can relate to my younger days. My inner child kicked to the fore and I started to imagine that I was right there with Cecilia, running around the forest maze, away from the black lions, and living in a castle. It seems no matter what age I am, I'm still dreaming of being royalty and wearing a tiara.

Cecilia Undergarment is nothing extraordinarily special, aside from the fact that she can talk to animals and she's good with plans. I think a lot of precocious kids will be able to relate to her because really, are there kids who don't talk to animals? Even some adults, myself include, still talk to animals. Cecilia's knack for making plans is also something that I think kids will be familiar with. I really liked the character, and that she was kind and very helpful. There was no character development going on here, but rather more of a testament to her smarts and ability to think of good plans at such a young age. There's a rather nice twist in the ending, which I did suspect when the hints were dropped here in there, but this wasn't a mystery book anyway and it gave me a good feeling when my suspicion was confirmed.

There is not much humor in the book, and while the story sounds fantastical, as the omniscient narrator says, everything had a really rather good explanation for why there's a perpetual dark mist over the forest, why there's an undiscovered castle, and why there was a surge of black lions in that particular forest. The slight bit of humor in Northwood comes in the form of the twins who kept trying to one-up each other all throughout the book.

The build-up to the whole story was very good; but the ending was quite rushed. I only just read the revelations when I saw the page number and saw that I was nearing the end. I couldn't believe my eyes, because I felt like there was more that needed to be said. Well, the ending turned out fine but there was no resolution to the Proctors, which should have been included, especially at it was due to them (quite) that Cecilia was in the dark forest in the first place.

The book has a few illustrations, but even without them, the forest, the castle, and the perpetually fighting twins came alive in my mind. I attribute that to Brian Falkner's writing talent. The cover of the book is almost very spot on. I was thinking that all it lacks are the twins somewhere and a castle in the distance, but then I realized the cover is already perfect as it is.

Northwood reminded me of younger times when I dreamt about running around the world, just having fun and having adventures. Then reality and adulthood takes over, and suddenly there are more 'you can't do that anymore, you're not a kid anymore' admonitions from people around us. The story was told lightly but the implications were a bit serious -- what if Cecilia never found a way to get back? What if Harry killed them all? What if they were truly eaten by a lion? But these are questions that an adult usually asks. I think that, for kids, there is always that wellspring of hope and belief that everything will turn out right, and you should have fun along the way.

Even if for a few hours, I was somehow able to let go of all the stress and weariness that responsibility brings, and I have Northwood to thank for that.