College sophomore Hannah Maquiling doesn't know why everyone tells her their love problems. She's never even had a boyfriend, but that doesn't stop people from spilling their guts to her, and asking for advice. So maybe it shouldn't be a surprise when the cutest guy in school tells her that she's going to have to take on this responsibility -- but for all humanity.

The Goddess of Love has gone AWOL. It's a problem, because her job is to keep in check this world's obsession with love (and lack of it). The God of the Sun, for now an impossibly handsome senior at an exclusive college just outside of Metro Manila, thinks Hannah has what it takes to (temporarily) do the job.

While she's learning to do this goddess thing, she practices on the love troubles of shy Kathy, who's got a secret admirer on campus. Hannah's mission, should she choose to accept it, is to make sure that he's not a creepy stalker and they find their happily ever after -- or at least something that'll last until next semester. (As if she could refuse! The Sun God asked so nicely. And he's so, well, hot.)


With Interim Goddess of Love, we are introduced to the main characters who play pivotal roles for the next three books: Quin, the sun god; Vida, the moon goddess; and Hannah, the interim goddess of Love. Diego, god of the sea, is also introduced, but while he does play a meaningful role here, I felt that he was more of a secondary, supporting character to the first three.

What can I say about gods? They're gorgeous, and they can do whatever they want. And Quin, Vida, and Diego do get away with a lot. Quin doesn't seem to be manipulating people, but Vida, she does what she wants to get her way. And Diego fights a lot, for some reason. I still don't get why he has to cause so much trouble. They have had a millenia to go about in their god ways. Hannah, on the other hand, was just chosen by Quin. I don't know (and it wasn't explained) why Quin chose her, but she is eager to fulfill this new role.

Quin is...well, the typical, brooding, secretive, darned attractive kind of male character. He should also be called the God of Mixed Signals because throughout the whole book, he keeps hanging out with Hannah and being there in the nick of time for her, and he seems nice, even gentle, towards her but he never says anything. Always so mysterious, that one. But then again, if you know how everything plays out and how things are supposed to go, then I guess he has his reasons for being the handsome, silent type, which is actually contrary to his being a sun god. Sun gods are usually the loud, showy types, aren't they?

Vida, physically, is your typical perfect leader in college. The characters are described as the typical king and queens you had in college, although describing them as such is justified since they are gods, after all, and they are typically physically perfect. I'm not sure how I feel about her - whether to sympathize with her, or to think she's really a manipulative cow who just wants more power. But then hating her would just be too easy. Also, she is contrary to being the moon goddess - you know, quiet, contemplative - but Vida is...out there. She's not exactly showy, but you can't help but notice her.

Hannah actually reminds me a bit about myself - the one people go to for love troubles, and friends with the guidance counselor (yeah, I was!). She is eager to perform her duties, either as an SK (scholarship kid) or as the goddess of love. I actually liked getting to know her.

In just 120 pages, Mina Esguerra was able to establish the personalities of the different characters in a creative way. She gave their character descriptions through the results of the personality tests that their school, Ford Rivers, give to students every year. I like that Mina contrasted Quin and Vida's personalities with their god designation. Sadly, they don't seem to have the usual powers like flying or invisibility, although Quin seems to be able to read minds or send messages via telepathy. I had fun reading about Ford Rivers, too, because it sounds a lot like the college I went to! Of course there were a few differences, but I really felt like I was back in college. In fact, I was imagining the characters moving in my alma mater as I read the book.

The Interim Goddess of Love was a smooth ride. Honestly, it didn't make me feel so kilig (this Filipino term does not have a direct English translation, but for lack of a better term: giddy - in a romantic way) and I didn't get hooked into the book as easily as I did with Mina Esguerra's other books (like My Imaginary Ex), but I decided to keep on reading. You know what? I finished the book with a smile on my face.

I cannot recall, at the moment, reading a book with a similar plot. I like that the ending does not feel forced. I also appreciate that Mina didn't push Quin and Hannah together, no matter how much they look cute together. There's also another guy for Hannah, Robbie, and he's just a normal mortal who likes her and even saved her. So maybe they're more suited for each other, them being both normal mortals, and Hannah is just the interim goddess after all. Wait, the mechanics of her being an interim goddess wasn't explained much in the book. Hopefully, this god-goddess factors will be explained more in the second book, Queen of the Clueless. Check back tomorrow for my review!

Want to get your own copy of the Interim Goddess of Love? 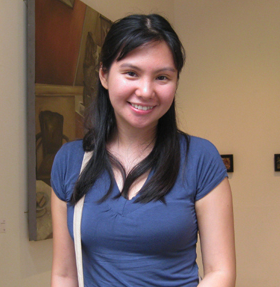