Review: A Spy in the House [The Agency, book 1] 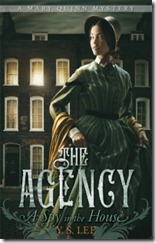 This is the first time I read a book by Y.S. Lee and I must say she’s off to a good start. Although I didn’t rate it a full five stars, I still enjoyed it and I am looking forward to the next book. I picked this book because I love reading books with female protagonists, especially female spies! Anyway, the plot is:

Rescued from the gallows in 1850s London, young orphan (and thief) Mary Quinn is surprised to be offered a singular education, instruction in fine manners — and an unusual vocation. Miss Scrimshaw’s Academy for Girls is a cover for an all-female investigative unit called The Agency, and at seventeen, Mary is about to put her training to the test. Assuming the guise of a lady’s companion, she must infiltrate a rich merchant’s home in hopes of tracing his missing cargo ships. But the household is full of dangerous deceptions, and there is no one to trust — or is there? Packed with action and suspense, banter and romance, and evoking the gritty backstreets of Victorian London, this breezy mystery debuts a daring young detective who lives by her wits while uncovering secrets — including those of her own past.
The book has several interesting major and minor characters and certainly had plenty of interesting twists and turns. Mary Quinn is a child thief turned respectable miss turned spy at the young age of 17. With the premise that women in those days are not smart and not as capable as men, women are great spies as they are easily dismissed to be capable of such spying skills. She’s nice, but not exactly my favorite female protagonist.

An interesting character was introduced in the series, James Easton. From the start, he actually appealed to me. He’s different from the men in the usual historical romance as he’s not a lord but he’s not portrayed as all that. He’s just a merchant and quite charming. He’s also very protective, but not such a know-it-all. He’s, well, he’s just quite right and quite believable. I mean, those lords can be so dashing but they seem impossible to find now. Hehe.

A minor character that pleasantly surprised me was Angelica Thorold. Of course this liking of her only developed by the latter part of the story. At the start, she’s such a piece of work. But, as Mary correctly surmised, it stemmed from her dissatisfaction with life, which stemmed from the pressure to do as expected of women at that time – which is to marry well and have children. However, I developed a little bit of respect for her when she decided to brave it out to fulfill her dream.

The book is great and filled with action, but it is not exactly one of favorites. Part of my dissatisfaction with the book is that Mary Quinn is not exactly endearing or has any particular special skill that sets her above the other spies I’ve read about before. This is either because this is Lee’s first book or because she’s a developing character. I’m holding out hope that this is a case of the latter so I’m to the next book!

Email ThisBlogThis!Share to TwitterShare to Facebook
By Goldie at 9:45 PM