Review: The Son of Neptune [Heroes of Olympus, book 2] 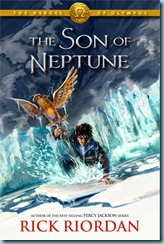 The Son of Neptune was released in the Philippines last October 05. Despite my reservations with National Bookstore, they ran out of stock and my copy will arrive in the next shipment. However, I wanted a copy immediately and I didn’t want to wait. My boyfriend, the good boy that he is, called up Fully-booked and surprised me with the message that he already reserved a copy for me. We raced around 8pm to reach Fully-booked in Greenbelt 5 and hurrah! The Son of Neptune is finally in my hands after 10 months of waiting.

I realize it’s been months since we the first book so for a little refresher on the book, read up on our review of The Lost Hero. Anyhow, The Son of Neptune just killed it. Geeeeez! Of course, you should know by now it’s about Percy Jackson. However, once again, Riordan throws a curveball, which somewhat confuses us…and leaves us wanting for more. The book churns out another prophecy and because of ‘this’ curveball, you can’t help but wonder who that ‘Son of Neptune’ will drown… After all, Percy doesn’t drown… can he?

So anyway, Percy wakes up and manages to get to the Roman Camp (Camp Jupiter). For all you new readers, sorry to burst the bubble! But anyway, he manages to gets there with no memory just like Jason except for one person: Annabeth. Honestly, the experience of Percy in this book is somewhat parallel to what Jason went though in Camp Half-Blood. It makes me wonder if there will be a battle of strong wills in the next book between the two of them, seeing as they are the primary leaders of both camps. But anyway, I’m getting ahead of myself.

So as was previously stated, Jason and Percy were switched by Juno/Hera because she thinks that by doing so, the two camps, which usually turn to arms against each other, will learn to fight together and prove to Jupiter/Zeus that the gods need to work with the demigods to fight the enemy: Gaea. In the 2nd book, there is not much mention of Camp Half-Blood because it was devoted entirely to presenting Camp Jupiter. After all, we already had 6 books (including the original Percy Jackson series) to get to know the Greeks so I think it’s just right that Riordan let us get to know the other camp.

Percy befriended Frank and Hazel but I won’t reveal their backgrounds! You have to buy the book and it is worth every penny. The three went on a quest as stated by Mars Ultor himself. You’ll be surprised at the difference between the Roman and Greek versions of the gods because they are actually different. However, it was only Hera who seemed to recognize Percy completely. When Percy and Mars met at the Camp, the god didn’t recognize him.

Anyway, you will all find the juicy details and other interesting tidbits when you read the book.

So do I recommend it? Heck, yeah. The book is a funny, light-hearted, well-written, and PG as always. It’s action-packed with a little bit of romantic inclinations, loyalty to friends, and familial love all over it.
I actually said, “UGGGHRGHAHGAH!'” when I finished the book. Not very clear, I know

But I said it more out of frustration because it was just so good and I’d have to wait until Fall of 2012 for the third book, The Mark of Athena. But then again, with two awesome books already out, I know it will be worth the wait.

Meanwhile, if you do get your hands on the Son of Neptune, be sure to check out Rick Riordan’s site for a map of Camp Jupiter, complete with brief descriptions of each area.

Ciao! :)
Email ThisBlogThis!Share to TwitterShare to Facebook
By Goldie at 6:27 PM