122 Rules' synopsis held so much promise. It was definitely along the lines of plots I love to read...


In his black and white world, Sam Bradford--former Marine turned government assassin--finally sees a speck of grey. He has always followed orders without question, but his latest assignment threatens to disrupt the precision of his universe and may either severe or redeem his last remaining sliver of humanity.

Using his mastery of the 122 Rules of Psychology, Sam hunts down everyone The Agency sends him to find and eliminates them. Just as he has his rifle scope focused on his latest victim, Monica Sable, a SoCal girl entangled with the mob, his long-dormant conscience reappears for a final performance...one last ditch effort to save the sinking ship of Sam’s soul. He’s killed innocents before, but tarries on pulling the trigger this time.

When Monica escapes his crosshairs and fumbles her way across the country in a pathetic attempt to elude capture, Sam gives chase. But he’s not the only one after her. Ruthless henchmen, hired by the mob, froth like bloodhounds and nip at Monica’s heels. Now Sam is faced with a choice: turn his back on the rules and jeopardize his way of life by helping her or join the pack and rip her to shreds.

But the focus of the book became confusing. The synopsis talks about the 122 Rules of Psychology, and the main character presented is Sam Bradford. However, Sam Bradford was only first mentioned in chapter 13, and he was not even the character mentioned in the very last chapter. Furthermore, the 122 Rules were not mentioned as often as I expected, given the title of the book. Lastly, his premise for saving Monica was because he remembered his ex-wife, Tracy, whom, as it has been established, wasn't even on his mind anymore and that he had become hardened. I guess that could be chalked up to our brains working differently and sparking memories we thought have been long buried.

Lastly, there was a chapter that has been repeated, but now with Sam's viewpoint. It was the whole same chapter, and it was very repetitive that I just skimmed through it and read Sam's thoughts. And the point-of-view of the characters kept changing, from Monica to Sam to even the assassin.

However, I'm giving this 3.5 stars because despite its flaws, I still enjoyed the story. The character, Sam, holds so much promise. He seems like an intriguing character. And the story was so fast-paced, I didn't realize I was already at 90% of the book. Reading felt almost effortless, except for the parts where I stumbled in confusion as mentioned above. Plus, although I didn't like Monica so much, as she felt like a whiny girl who just don't understand that they're trying to protect her, I did like her kick-ass best friend. As this is an ARC, maybe the final version will be better. 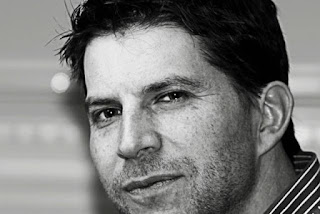 
Deek lives in a rainy pocket in the Pacific Northwest with the stunning YA author bride, Erin Rhew, and their writing assistant, a fat tabby named Trinity. They enjoy lingering in the mornings, and often late into the night, caught up Erin’s fantastic fantasy worlds of noble princes and knights and entwined in Deek’s dark underworld of the FBI and drug lords.

He and Erin love to share books by reading aloud to one another. In addition, they enjoy spending time with friends, running, boxing, lifting weights, and exploring the little town--with antique shops and bakeries--they call home.