I'm glad the author, Erec Stebbins, contacted me for a review. Even though I was super busy and haven't had much time to read all emails, this particular request caught my eye because it talked about technology, and I looove technology. And I'm also glad I gave it a chance!


NO FORGIVENESS. NO FORGETTING. EXPECT IT.

The global financial system is in chaos. World leaders have been compromised. An unstoppable computer virus eats through the Internet.

Join an elite team of FBI and CIA agents, and the shadowy figures they must work with, as they try to stop a global catastrophe and act of digital terrorism unlike anything ever witnessed.

At first, I thought it was about the Anonymous group per se, but not really. It was more about a lone paranoid hacker, named Fawkes, who created a code so brilliant that he was able to cripple the economy not just in America but around the world.

It's a little disconcerting to think that this could possibly happen, and I suppose that was part of my discomfort while reading the The Anonymous Signal. It kept me on edge as I read the narrative.

The characters were equally engaging as well. Intel1, the group who primarily handled the case, had an interesting motley crew. There was Savas, his partner Cohen, then a hacker named Lightfoote (or Angel), and The Priest and The Whore, who are just kick-ass characters I would love to know more about. Since the world as they knew it looked like it was ending, Savas called a lot of shots that ordinarily would have landed him in a whole lot of trouble. I like the leeway given in this situation, which was very appropriate.

There were little depositions inserted at the start of every chapter were the foreshadowing, but I was still surprised with the twist in the end that hopefully will be resolved with the sequel, The Nash Criterion, that comes out in 2016.

What I didn't like about The Anonymous Signal was that it became too technical at times. Sometimes I would get a little lost because I couldn't understand what they were talking about, but I just trusted that it would work out in the end. One example was the worm that Angel created to counteract or nullify the act of the malicious worm that has brought down the world economy. At first, I couldn't understand it, but it was explained several times (to different people) that I got the gist of it in the end.

But The Anonymous Signal was a sure thriller that had me smiling when it ended. And also furiously swiping my tablet left because I couldn't believe that it was done! Stebbins sure knows how to hook me on to the next one.

If you're looking for a techie espionage thriller, I do recommend The Anonymous Signal. 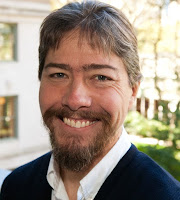 Erec Stebbins is a biomedical researcher who writes novels in a variety of genres. He is also an associate professor and head of the Laboratory of Structural Microbiology at the Rockefeller University in New York.